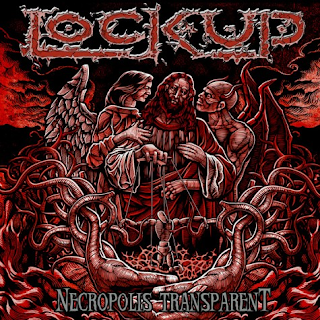 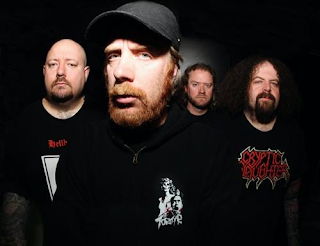 Lock Up has been a pretty well acclaimed grindcore act in my experiences with the group, though I'm sure there are plenty of negative reviews out there, I just haven't read any for the first two discs. This third album is the first in about nine years. Returning with this album, once again with what could be termed as a super-group, I'm just not sure about it, because from what I've seen so far, it looks as if it's nothing special.
This album certainly doesn't hold as much of a grindcore element as I expected, recalling a lot more of an old-school thrash, black, and death metal sound, mixed with a lot of crust punk and hardcore. I don't know, it's really aggressive, no doubt about it, and Tomas Lindberg sounds extremely pissed off, but there's just something about this that just doesn't feel the same. I don't even doubt the emotional quality of the music, if only because I believe Lindberg is one of the few death metal, whatever, vocalists that legitimately sounds angry and pissed about what's he's singing. There isn't that chaotic atmosphere that was present on "Pleasures Pave Sewers." The cleaner production doesn't do much for me either, I think grindcore works best when it's a little more rough around the edges. It's not even that I think this record is bad, I just feel like something is missing.
Tracks like the blistering Anvil of Flesh or the thrashy Roar of A Thousand Throats are intense and maybe enough to get me riled up, but not enough to really grab me with any sort of emotion. A lot of this just leaves me feeling empty, it really isn't anything all that special. A lot of this just blurred together way too easily, it became difficult to really tell where I was in the album at some points, I know grindcore has never really been a genre known for it's variety, but I wish there was at least some more variation within these tracks to really make it feel like different tracks. Every song basically contains the same sounds, you have a thrash riff here, a grinding or more punk based moment in the middle, a nice black metal sounding riff thrown in for good measure, then back to the main riff, it's gets old pretty damn quick, at least for me, just listen to Accelerated Mutation and Through The Eyes of My Shadow Self to test it out. Not even Peter Tägtgren and Jeff Walker, two of my favorite death metal vocalists, can make this album sound better with their appearances.
In the end, this just didn't do a whole lot for me, it really wasn't anything all that special. I wish it gave me the same sort of headbanging, fist raising energy that some other grind albums have given me, but it just didn't, unfortunately. Check it out if you're into grindcore, but otherwise, try their first two albums before you get this one.
Overall Score: 6
Highlights: Necropolis Transparent, Rage Incarnate Reborn, Roar of A Thousand Throats, Vomiting Evil
Posted by maskofgojira at 7:53 AM