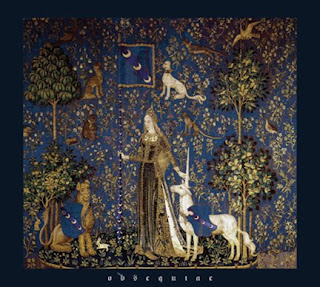 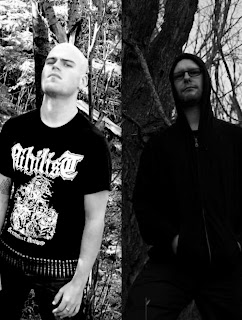 Despite how I feel about Celestiial, probably the most well known project of Tanner Anderson, I had heard nothing but good things about this project. Supposedly the continuation of an earlier project called Autumnal Winds that was around since the late 90s till around 2005, a more black metal based band. With nothing but good things, and some odd comments about how this actually sounds, I became interested rather quickly.
I remember several comments and reviews of this album mentioning things like medieval sounding melodies, lots of bass, and harmonically complex, all of which are things that could potentially lead to a very cheesy sounding blackened folk metal record. Fortunately enough, all of these things immediately show up in opener Altars of Moss and prove any doubts I might have had about it wrong. Personally, I like folk music, I enjoy the melodies used in a lot of folk and acoustic music, and medieval music isn't something I listen to, really ever, but don't dislike, and I find that a lot of folk metal groups, or blackened folk metal groups, never hit the right balance between the two to sound authentic and aggressive. What I found on here is as dense and chaotic as black metal, but as melodic and memorable as folk music, adding up to something quite extraordinary.
I know that I use the term "progressive" a lot in my reviews in different contexts, and I'm sure saying it here will get more than a few people upset, but listening to a song like the title-track, Suspended In The Brume of Eos, it's hard not to hear the great take these guys do on the blackened folk thing, I haven't really heard any other band sound as rich and complex as these guys. To bring up the bass situation for a second, while I had heard there was a lot of it on here, it wasn't what I expected. What I came in expecting to hear was something along the lines of having the bass being loud in the mix, like albums from prog-metal groups like Spiral Architect or the first Cynic album, but instead, the bass is lower in the mix, but is still just as well played. But to reiterate here, this album is also really catchy, with tracks like Atonement that just caught my ear from take off. But even at it's most straightforward and aggressive moments, Arrows being a prime subject, there's still something worth looking back at and listening to again, because it isn't just fast and primal black metal with melody, during points like that, it's something much more subtle that lures you back.
I really can't say a bad thing about this record, it's a lot better than I even expected it to be. My only complaint is that I wish it was a little bit longer, had another couple of songs, because it's that damn good. If you like folk music, black metal, progressive rock, etc. check this out, I'm still in awe of it after several listens.
Overall Score: 9
Highlights: Suspended In The Brume of Eos, The Wounded Fox, The Starlit Shore
Posted by maskofgojira at 10:57 AM