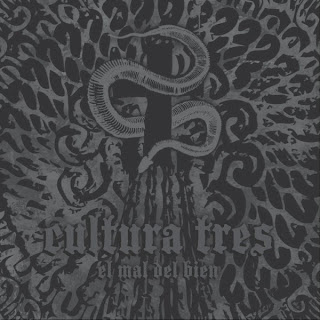 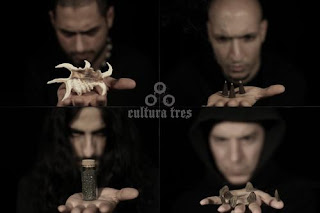 I don't review a lot of albums from South America, so when I was sent this album I was a little intrigued. In fact, I'm not even all that familiar with a lot of groups from South America, sure I know a few of the black metal groups, Sepultura, and the few proggy groups my father enjoys, but I would say it's a country I've ever explored. So when I found out it was a doom band, it was like, "Sure, I'll listen to this."
I've come to try and not put expectations on bands playing doom, because a lot of it isn't very original and doesn't bring a lot of new ideas to the table. It's slow, it's usually heavy, it relies on groove as much as melody, and the vocals can range from operatic cleans to low gurgles. So what do you get with this band, well you get a very sludgy take on doom, because this is a doom metal sound. You'll immediately notice a large blues influence throughout, hear Purified, which definitely lends itself to what these guys are doing with doom. It's somewhere between being in the traditional heavy metal and old-school blues rock and then modern stoner rock and sludge metal. I'm actually all in favor of bands, especially doom bands, bringing back more of a blues-esque sound into metal because I don't hear enough of it.
Unfortunately, I just found this record to be really tedious, for some reason. Not every song is bad, in fact none of them are, but a lot of the songs on here are just very uninspired and feel very dull, Propiedad De Dios and for example. I don't even think it's that these riffs or patterns have been done to death as much as they're just boring and very lazy sounding. I don't even think I can fault these guys too much, because I'm sure a lot of bands in doom are doing something similar. I don't want to give the impression that this is a bad album though, because there are quite a few good songs on here, a lot of it just happens to be quite forgettable. As the album progresses, it becomes a bit difficult to really see what the band what to be, some songs are more traditional doom metal songs, others demonstrate a larger sludge influence, and then there are tracks like Holy Graveyard where more of a death/doom sound is showcased. I don't have a problem with diversity, but this just feels like a lack of direction to me.
By the end of the album I was disappointed, it had it's moments, but to be honest those were contained in the middle of the album, with the beginning and end containing some extremely tedious and boring songs. There's nothing wrong or offensive on here, but I certainly can't see myself returning to this again. If you like doom or sludge, check it out, but it's nothing really special.
Overall Score: 5
Highlights: El Sur De La Fe, The Grace, Tres Seis Diez Dos
Posted by maskofgojira at 8:38 AM