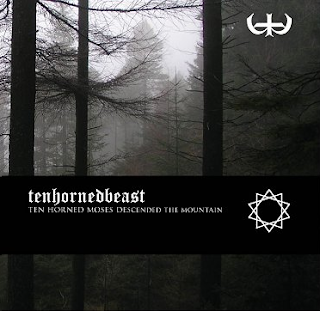 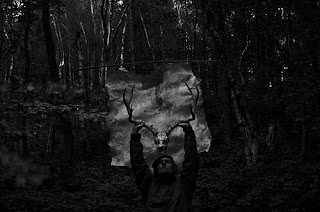 My recent flirtations with drone and ambient music have been growing over recent months, with my enjoyment of more than a few artists I have otherwise overlooked. Christopher Walton's TenHornedBeast is one of the few that I've come to enjoy quite a bit from. Each release provides a different take on and alteration on the dark and droning sounds of dark ambient music.
Now, I have to point out the biggest problem with this record first, because it is the steepest hill to climb. This is a three-disc album where each of the discs holds a single track that tops sixty minutes in length, making an album that tops 190 minutes in total. This is a very tough listen and because it's ambient, because it's drone, because it's minimally composed, it is a difficult listen. I'd like to think of myself as a patient listener, but even this became trying. Listening to all three albums straight through, no breaks, is tiring and at times boring. I can appreciate ambient music and drone music in a live setting and on record, but this is just a little too long for me. Individually, they did work better though.
Now, this certainly isn't without it's rewards, despite it's length, this thing, over the course of each track, does change, if ever so slightly. There are subtle shifts, mainly in the background, that reveal themselves over the course of each track. In the past, Walton has made his music much more aggressive, with droning, to an extent even doom metal-esque, guitars more at the forefront of the sound, but most of what's one here is synthe and keyboards at the forefront. Granted Celestial Pathfinder is the calmest one of the bunch on here, it still has it's moments of distortion, though still nowhere near as brutal as Choose For Yourself The Might of The Earth which is essentially the closest thing to the project's earlier material on here. The third track, The True Voice of God Is Silence, actually manages to tread ground on almost new age music, though it's more in the choice of sounds that an ideal or additional instrumentation. I've always thought of ambient music as background music and this thing can be a bit too loud and "metallic" at times with some of the drones in the background to really be put into that category.
In the end, it's not so much that I didn't like this record, it's just that I feel like it's too long. Three discs that top three hours in total is just too long for a single, straight-through listen, but like I said, individually, the pieces do work and are enjoyable. I think this is sold out right now, but definitely go back and check out earlier releases cause they are quite good.
Overall Score: 6
Highlights: Choose For Yourself The Might of The Earth
Posted by maskofgojira at 8:22 AM