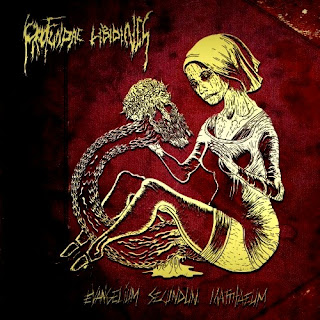 Raw black metal from one of the countries releasing some of the best black metal in recent memory, for myself. I really haven't heard all that much about this album, it's pretty obscure from what I understand. Why not look into something obscure once in a while?
After a rather pointless and odd sounding intro, this thing just opened in a way that for some reason I never considered it to, for some reason. Being so raw, not noisy in the black noise genre sort of way, but more, early black metal way, I was surprised. Obvious nods towards Darkthrone, Immortal, Arckanum, and Mayhem can all be found throughout this album. It's a sound that has been done to death, but sounds very lively here, even with a rather poor drum machine sound, with tracks like Matthaeum 5 - (Le Vrai Bonheur) just bringing that early sound a breath of life. You won't find a whole lot of surprises on here, I personally found it a nice tribute to most early 90s black metal records, you have the raw production, some more atmospheric parts, symphonic keys pop in sometimes, and a rather straightforward songwriting style. It's not very original, but it's a fitting tribute.
Like I said above, there's relatively little info on this project out there, but I have seen that people have at least enjoyed the vocals. The range displayed is indeed very impressive, you have everything from Immoral-esque raspy vocals to the more depressive sounding howls and even some extremely weird baritone singing and guttural death metal growls, all of which comes off sounding really off the wall. Combine that with the more avant-garde take on the sounds above on a track like Matthaeum 27 - (Jésus Est Condamné A Mort), which definitely comes off sounding like Pensées Nocturnes, this thing can get a little bizarre. The latter half of the album also makes use of a lot more bass, which funnily enough, I found a lot more interesting to listen to than the guitar.
Definitely a lot more of an oddball than what I had expected it to be, and what it made itself out to be in it's first half. The raw production is a bit off putting if you like more modern albums, but if you can handle the old-school stuff, I don't see why you couldn't get into this. Check it out if you like weird sounding, raw black metal.
Overall Score: 7
Highlights: Matthaeum 5 - (La Mission Des Douze), Matthaeum 26 - (Pierre Renie Jésus), Matthaeum 27 - (La Mort De Jésus)
Posted by maskofgojira at 11:48 AM