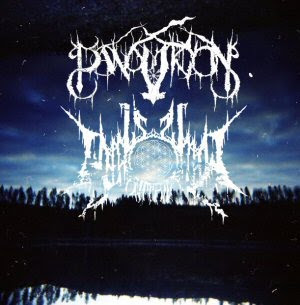 Despite feeling like I know several people who like both of these bands, I still feel like they're pretty unknown, so I might as well do an introduction to both here. Both of these bands are one-man operated projects, obviously they're both from Louisville, but beyond that, you can find both of these guys playing in Seidr. This is the second split the two bands have done together, and this one expands upon the first one with even more sounds.
Wheels Within Wheels starts the split off, with sole member Crow providing his unique take on blackened noise. Don't let the idea of blackened noise turn you off of this, because despite all the really bad groups connected with that sub-genre, there are some great ones, WWW being one of them. The sound on here, and really every one of his releases, is really blown out and distorted sounding, but is surprisingly melodic and atmospheric. Behind all the raw noise and distortion is a lot of great guitar melodies and bright, captivating atmospheres. In the past, elements of post-rock/shoegaze could have been found, but on here, they really come out in full, with A Burial of The Mother of Orion closing up in a fantastic way. I'd actually go so far as to say that this might just be WWW's most accessible material yet, it's melodic, it's not as blown out as some of his previous material, and it's just good at blending unlikely soundscapes together in a very good way.
Other the other hand, you have Panopticon, who's sole member, Austin Lunn, has been providing listeners some great experimental black metal in the last few years. With early releases really being quite raw and visceral black metal with influences from crust and bluegrass music coming through, and more recently moving into incorporating more shoegaze and post-rock influences as well. The three tracks on here from Austin provide an even more atmospheric and shoegazy vibe than the material present on last year's "On The Subject of Mortality" compilation. Granted, the production on here is still quite raw, though not as much as earlier releases, I found the mix to be a lot more fitting. Earlier albums have had the drums very up-front in the mix, with Lunn being a drummer I'm not all that surprised, but on here, the mix is a lot more balanced. These three songs are also some of the melodic he's produced, which goes well with the two songs Crow put on here as well.
Easily one of the best splits, if not the best, I've heard all year. I can only hope that the future releases to come from both these guys lives up to this, or hopefully tops it. Definitely check this out, highly recommended.
Overall Score: 8
Highlights: A Burial of The Mother of Orion, From Bergen to Jotunheim Forest
Posted by maskofgojira at 7:09 AM