Arizmenda - Without Circumference Nor Center (2011) 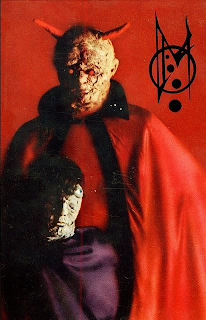 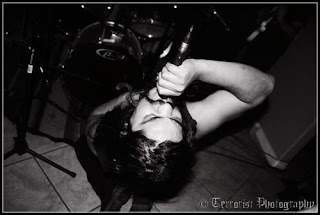 The Black Twilight Circle is kind of a touchy thing right now, what with a lot of the bands being good but the services of them being quite bad. I guess some people don't like waiting months to get something they ordered from the label, but I guess I'm just lucky that I actually got everything I ordered from them. When it comes to this band, they were, looking back, the first of the group that I had found and liked.
When looking to see what people thought of this album, from those I considered to be either friends or good writers, I found response to be pretty mixed, with people claiming the music was good, but the production and vocals had gone down hill. After listening, cause I've had this for a little while, I couldn't really agree more with those statements. To focus on the production aspect first, this is definitely more bass-heavy, with a lot of the treble in the mix kind of being drowned out by all this low-end noise. In all honesty, I'd like to think that I'm a tolerable and patient person, but all this low-end got annoying real fast on here. I'm also well aware of how crappy the mixes on Crepuscule Negro are, but seriously, what went on in a track like Riders of The Pale Horse... Crucifixion of The Worm when they were mixing it, the bass just moves up and down throughout the song while certain guitar parts are just put at the very front while the main riffing is still behind it.
When it comes to the whole concept of this being more of a ritual than a show, or rather album in this case, I can definitely see where they're coming from. While this is definitely not as atmospheric at the debut, this does still have plenty of atmosphere, but it's in a much more chaotic manner. The guitar playing is actually well played on here, which makes it all the more disappointing because it can get lost behind all the low-end on here. The second half of this album has some nice guitar parts, Virginity Without Breath... Touch Me and Swallowing Seas of Dirac... Smashing Vessels Spilling Thought in particular. As for the vocals, I certainly agree that they are nowhere near as good as on the debut, favoring a tortured moan and bellow in favor of the tried and true screams of the past.
For all it's flaws and poor mixing, I still feel that there's some really good stuff on here. I already know a lot of people have had just as much trouble with the production as I have for this, at times it did start to give me a migraine. If you're into black metal that's pretty raw and atmosphere, I suggest you look into this band.
Overall Score: 7.5
Highlights: Tear You Out From Within... Tear You Out With My Sin, Swallowing Seas of Dirac... Smashing Vessels Spilling Thought
Posted by maskofgojira at 9:33 AM