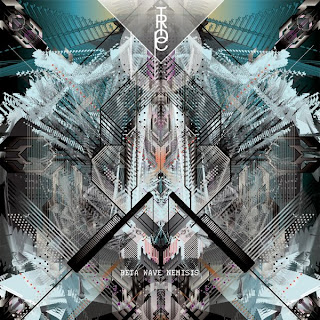 Before getting this album, I had no idea as to what kind of sound it would have, it was all cause the cover was interesting. Surprisingly enough, this collaboration between dark ambient/black metal artist Daniel Jansson, of Deadwood, and Osman Arabi, who works in similar realms of ambient, metal, and noise. This single track album certainly surprised me.
Whether or not you're into noise, dark ambient, industrial, etc. music or not, I feel that it is a genre that you have to acknowledge, it is music, stop pretending that it isn't. I takes the ability to really control and harness sounds into different shapes, if you get what I mean, and atmospheres that makes them genres worth listening to. These genres specifically are the ones that are manifested on this recording, with both artists playing at least a small role within black metal, that sort of darkness, presented in the form of noise, can be found on here. Granted, even at it's most intense moments, the noise is never like a punch in the face, it's more like someone slowly strangling you, it's not as brutally aggressive.
There's a general sense of building tension that is found on here, where things become increasingly more tense as the track progresses. Moving farther and farther away from the ambient beginnings of the track, noise begins to overtake it. In spite of it's length, which just tops thirty minutes total, this track feels nowhere near as long as that. There's plenty of different sounds and atmospheres being introduced, transformed, taken away, and then reappearing within it's duration and it just isn't boring in the least.
I really enjoyed this album, and it presents a different take on noise/dark ambient music that I've haven't heard a lot of yet. I know that a lot of people aren't going to like this because "noise isn't music," but this was really cool. Definitely check it out if you like more experimental ambient music.
Overall Score: 8
Highlights: There's Only One Track
Posted by maskofgojira at 9:59 AM