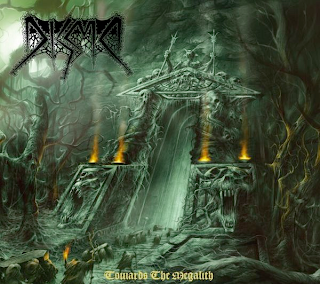 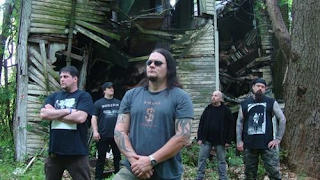 Whether or not I've said it before or not, I am a fan of death metal that sounds old as opposed to sounding clean a polished for the most part. For myself, nothing beats the sound of late 80s and early 90s death metal. I know a lot of new death metal bands from Europe are being put into the new wave of old-school death metal, but this is old-school being done by old-school guys.
Only good could come from bringing together members from Incantation, Funebrarum, and Evoken, at least in my mind. I am a fan of all of those bands, individually, and bringing together members from each of them could only do good. But onto the actual music, if you like your death metal polished, look elsewhere. This raw, and actually a little muddy, sounding record is how death metal should sound, in my opinion. While being technical lends itself towards higher production values, the simplicity that normally comes from doomy death metal bands should be kept raw and crusty. While polish and pristine death metal albums are a lot more accessible and easier to digest, for the most part, being as grimy and filthy was how it sounded in the beginning and is how, I believe, it should sound now. I'm also liking how this makes use of quite a bit of reverb as well.
I absolutely love Craig Pillard's vocals; they're low, brutal, but clear. So many modern death growlers don't strike that balance, it's either all about being low and guttural to the point where what you're saying is as indecipherable as your band logo, or it's clear by it doesn't have all that much power to it, so higher screams are used to compensate, I think I don't have to name any names here. Instrumental wise, the style descriptions I've been told are pretty accurate, it's doomy death metal. It's fast sometimes, Purulent Quest, and it's slow other times, Vault of Membros, but there's enough variety and switching between the two to keep that simple formula working for all forty-five minutes on here. These guitars are also tuned low, to the point where I can't imagine these guys being able to get through recording each of these tracks without having to start over and re-tune. This isn't brain surgery, this is fucking death metal and this is how it should be played, crusty and brutal, not br00tal.
Old-school death metal still kicks the ass out of new-school death metal, and chock this victory up to the former cause this thing is great. No one does death metal better than the guys who started it and know what they're doing. Not groundbreaking, but certainly well worth checking out if you like death metal.
Overall Score: 8.5
Highlights: Chasm of Oceanus, Purulent Quest, Lost In The Burial Fog
Posted by maskofgojira at 10:06 AM