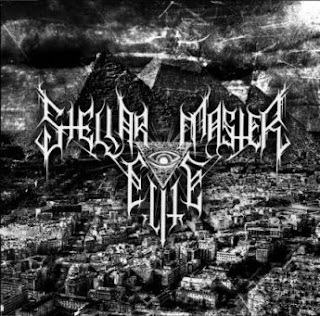 I'm sure people who just browse around this blog will see that I review a lot of black metal, if only because I am more preferable towards it than other genres. The reason I bring this up is simply due to the fact that while there's a lot of different stuff out there, black metal in almost any form has the potential to at least interest me. This debut from this German outfit caught my attention when it was sent to me.
A lot of modern traditionalist black metal doesn't really do much for me and the whole blackened death metal thing, or deathy black metal, never really appealed to me beyond a few bands. I've stated in the past I love a good thrash metal riff just as much as the next guy, but I'm not a thrash guy, though a solid helping of blackened thrash is always a treat for me. Why do I mention this in here? Well, you'll find bits of all of that in here, a big helping of blackened thrash interspersed with some more melodic death metal and industrial elements being tossed in as well. Now, in spite of all that I said above, which I'm sure would make you assume I'm not a fan of this, I actually really enjoyed this record.
This six song album just moves along at a great pace, with a nice amount of diversity demonstrated throughout. You have faster songs, The Circle, but also some more mid-paced tracks like Elyon, as well as the more doomy track Ain Soph. There's just a lot to really like about this, it isn't one dimensional. Like I said above, the genres that I'm not into, they're presence is definitely felt on here, more so in the faster tracks mind you, but I don't think it irritated or bored me, like a lot of other bands coming from those scene do, which is obviously a plus in my book. I'm actually a little shocked by how well put together this is, for a debut, it's really well constructed and performed. I think it's a little weird that Prelude II is the closer, when it to me it sounds like it would've gone over as an intro, but that's just me. Personally, if I had to gripe on it, I'd say the production sounds a little bit too clean for my personal taste, but that's only a minor criticism for this record.
It's records like this that keep independent bands exciting for me, every once in a while you'll stumble across something interesting. While it's not an original sound, yet, these guys are definitely onto something and I can't wait to see where they go in the future. Check this out if you like some varied sounding black metal.
Overall Score: 8
Highlights: Vortex Void, Ain Soph
Posted by maskofgojira at 6:47 AM