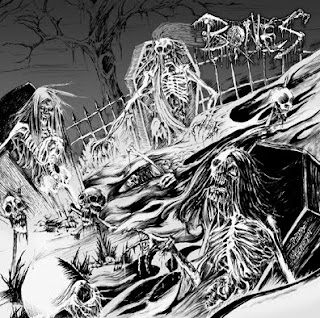 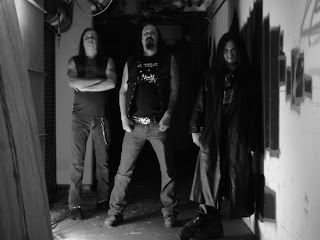 It didn't take much convincing on my part to look into Bones debut full-length. Black and white cover of zombies rising from their graves, death metal, crust influence, an obvious band for me to at least check out. I have high expectations for modern death metal bands doing old-school sounds so these guys did have to live up to my hopes for them.
As soon as March of The Dead opens, this thing just blazes forward with a very thrash metal oriented sound. Fast, blazing, Anthrax or Exodus-ish riffing that just steamrolled me, even though I'm not even a big thrash guy, as I've said in the past. Within that track though, there's also a noticeable blues influence as well, the chorus just screams blues-rock and isn't really dissimilar to something you might hear from a band like Clutch. The death metal sound on here is actually pretty minimal on here, much less than I anticipated. A lot of this is pretty straight-ahead stuff, you won't find a whole lot of technical solos or use of melody, it's pretty much based on groove and aggressive riffing to run you over.
The production on here is probably what recalls the old-school death metal sound the most, well, that and the vocals. The production is pretty tinny sounding, with a lot of fuzz on the guitar and bass, and the vocals are sloppy and sound like someone is torturing this guy. It honestly sounds like a death metal album from the late 80s and early 90s, groundbreaking stuff, no, but think more on the lines of something like Malevolent Creation. Granted, cheesy and cliched lyrical topics aside, 666, the sound of the album is good for what it is.
It's a decent album, but nothing great by far. I personally would have liked it to have been a bit more death metal, cause that's kind of what I expected it to be, but what they're doing is solid stuff. Check it out if you like early thrash-oriented death metal.
Overall Score: 6.5
Highlights: March of The Dead, Good Die Young, Delirium Tremens
Posted by maskofgojira at 7:32 AM