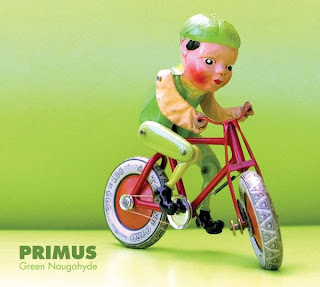 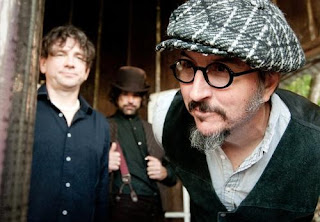 I'm not sure whether people are aware of this or not, but I'm a big fan of Primus. Bands like Primus, Faith No More, and Mr. Bungle are all some of my favorite bands of all time, if only because no other band sounds like them. Over a decade of waiting, and here we finally have a new record, about time!
After another pointless intro, the first song, Hennepin Crawler, opens up in possibly one of the darkest Primus songs I've heard since "Pork Soda." Granted, in the grand scheme of things, the song itself is actually quite simple sounding for a Primus song, the bassline isn't all that weird, the vocals are done in Les Claypool's usual distorted spoken word fashion, and the guitar patterns are weird, but it honestly didn't impress me all that much. Then Last Salmon Man came on and I got what I wanted. This track was interesting, in a good way, it definitely brought up more of the psychedelic/progressive rock influences that can be heard in later Primus records as well as Claypool's solo material, but kept the song going with more interesting bass-lines and Larry "Ler" LaLonde's interesting guitar lines. Granted, the real funk rock doesn't really emerge until track five, Tragedy's A' Comin', it comes out strong in my opinion.
Maybe it's just cause I'm a huge fan of FNM and Mr. Bungle, as well as artists like Frank Zappa, that I've always loved how quirky Primus made their music. Even at it's darkest, it always sounded fun and interesting. I seriously can't help but love the spin these guys take on songs like Moron TV, where it's so blunt, but so weird at the same time, plus his vocals sound like something Mike Patton would come up with. Songs like Eyes of The Squirrel and Jilly's On Smack are seriously some of the darkest stuff I've ever heard from Primus, and the music only enhances the lyrics and vocals with their more minimal approach. I thought some of the more spacey moments on "Antipop" were cool, but it seems like they've really taken them on board for this album.
In all honesty, I was kind of let down by this album, maybe it just needs to grow on me a little bit more. After a couple listens, it has grown on me, so at least I know that it is a lot more of a grower than I anticipated. Definitely check out this great band if you haven't yet though.
Overall Score: 8
Highlights: Tragedy's A' Comin', Jilly's On Smack, Extinction Burst
Posted by maskofgojira at 8:52 AM