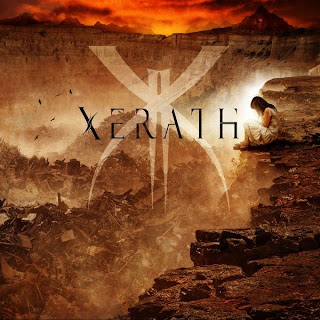 With the release of their debut, "I," back in 2009, Xerath were thrust into the metal spotlight. Combining elements of Dimmu Borgir, Meshuggah, and Strapping Young Lad was a volatile concoction, but one that worked for them. This, their follow-up, sees the band progressing into an even more progressive sound.
The use of groovy riffs mixed with a symphonic backdrop could go array if not done carefully, but luckily, the band have only gotten better with their compositional skills on this album. It's obvious when listening to a track like Unite to Defy, that the different sections, the horns and the strings all have their own role in creating a certain atmosphere. I do have to say that when listening to this album, it takes a few tracks before the production starts to sound fine, at least for me anyway, and the guitars finally stop competing with the orchestral backdrop. I do have to give it to the band that each and every player can be heard, even the bass, which really impressed me, given how much is actually happening in a given track.
However, the metal part of this album is nothing to wave a finger at either. Guitar riffs a lot more memorable and the vocals have improved, to the point where they're drawing comparisons to Devin Townsend. Tracks like Reform III and Nuclear Self Eradication show the band at their most extreme, meanwhile tracks like Machine Insurgency and The Call to Arms show the band writing some of their best songs yet. Songwriting has improved and longer song structures definitely show that the band were willing to expand upon the more simplistic sounds of their debut.
Overall, this is a great album and a really strong follow-up to their debut. In my personally opinion, it expands upon the groundwork that the first album did and improves upon it. If you like groovy, symphonic, and progressive sounding metal, this is an album you won't want to miss.
Overall Score: 8.5
Highlights: Reform III, The Call to Arms, The Glorious Death
Posted by maskofgojira at 10:53 AM