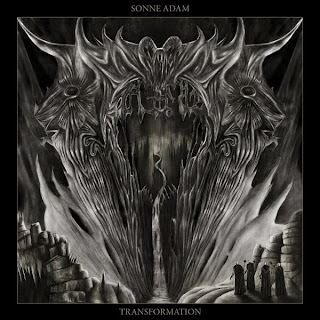 I'm honestly surprised that this record is coming out on Century Media Records, I really am. When I heard a few tracks from the band's debut EP, last years "Armed With Hammers," it didn't strike me as a a band that would end up being signed to a label this big, not that they don't deserve it though. It just makes me wonder if old-school death metal sounds are finally making a comeback.
In recent years, I think most will agree that a label like Century Media has signed dime-a-dozen deathcore groups recently, but this is nothing like that. What you have with Sonne Adam is a sound that really takes the atmosphere and slower nature from doom metal and mixes it with elements of blackened death, the tremolo picked guitar lines, heavy palm muted riffs, and throaty growls. It's easy to draw comparisons to groups like Celtic Frost, Incantation, Portal, and Autopsy as influences on here. While I don't think anyone could call this all that original, it's done in a way that definitely has a certain charm to it that is totally unique, hear a track like Sonne Adam.
The atmosphere definitely brings this band a very different sound compared to their piers. While even more doomy death metal bands, like Hooded Menace, are certainly doing a relatively similar style, the atmosphere this band possesses really adds a certain bleakness to this album. A track like Shine definitely wouldn't feel as dark as it is without the dense soundscape behind it and the sounds on the title-track, Transformation, definitely stand out as being some of the best ambient sounds on this album.
Overall, this is a very solid debut release that recalls some excellent old-school death/doom metal. While it's still a bit immature in terms of songwriting, I feel it could be better, it's certainly not a bad place to start. Definitely check this album out if you're sick of modern metal and want something atmospheric and heavy.
Overall Score: 7.5
Highlights: Sonne Adam, Take Me Back to Where I Belong, Transformation
Posted by maskofgojira at 8:31 AM