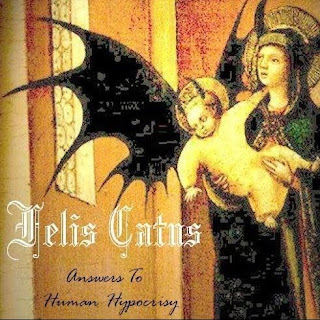 As a whole, the black metal scene is constantly evolving, sub-genres keep popping up every which way you turn and new bands with creative ideas are suddenly appearing. Felis Catus is a new group whose debut caught my attention after hearing some samples on Youtube. This debut definitely showcases a desire to explore unknown territory.
After a fairly traditional symphonic intro track, Apocatastasis begins exactly how most albums do in this sort of situation, fast and brutal. The exception being that midway through the track, the whole thing devolves into a more hymnal organ section that caught my attention. This whole album is one that is constantly bringing new ideas to the table, like the blues guitar work on Jakob Lorber.
When I think of ambient black metal, I think of bands that are more along the lines of Xasthur, but what's on here has much more in common with the industrial black metal scene. Acts like The Axis of Perdition and Nekrasov come to mind when compared to this band, but what's on here is much more melancholic and almost subdued in comparison to those two. Tracks like Wine and Roses and Night Gaunt don't so much blast or even go to a metal sort of level as much as they expand on a dark ambient background. The use of samples on here also really adds a different vibe to this record, granted, I have no idea what the samples are from or what they're even saying, but they're still pretty cool.
Overall, this record was certainly a unique experience and one that I think a lot more people should hear. There aren't really a lot of bands doing this sort of thing, besides the ones I mentioned above, but even they're pretty far from what this is. If you want a unique sounding industrial tinged metal record, definitely check this disc out.
Overall Score: 8
Highlights: Through The Centuries, Jakob Lorber, Commemorati
Posted by maskofgojira at 7:06 AM