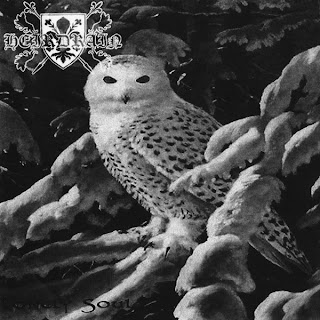 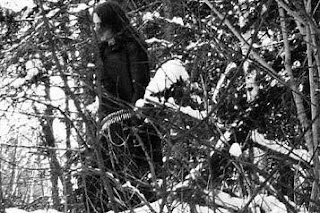 Despite releasing his very first release back in 2006, Heirdrain's A.O.S. Heirdrain has released seventeen full-lengths prior to this one, and that's excluding all the demos, splits, and EPs. He's a prolific musician who I know relatively nothing about. This is my first encounter with any of his work, and from only having four tracks, I have some high expectations.
First off, I'll say that despite having only four tracks, this album is almost a full eighty minutes in length, with each track topping fifteen minutes. The first of these tracks, Fortress of Loneliness, is a Sunn 0))) influenced, or at least sounding, drone track, that slowly escalates from bleak drones to include more atmosphere. The vocals and drums don't really add too much to the actual track itself; but I could see fans some finding this easier to stand and help to kind of give a drone song a sort of accessable structure in that similar vocal patterns are reused in the track, but it they also kind of take away from the hypnotizing atmosphere that this track has. This style is carried out throughout the other three tracks in a similar fashion, to varying degrees of success. While the lengths of the tracks certainly reflect drone metal and funeral doom, I found that the lack of any interesting atmospheres or melodies really made me drift off while listening to this. The sound of the record is certainly one that could be compared to Sunn 0))), but it certainly doesn't have that same air of experimentation and darkness that that duo has created with their sound. I won't say it's all bad though, Always Suffering Until... has possibly the best sounding atmosphere on here.
Overall, while I wouldn't call this a bad album at all, I just couldn't get into at all. These tracks just went nowhere for me, and I could definitely see other people getting a lot more out of this than me. If you like drone metal, check this out.
Overall Score: 6
Highlights: Always Suffering Until...
Posted by maskofgojira at 10:16 AM