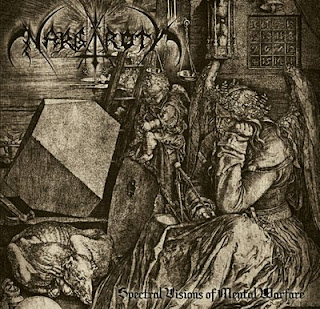 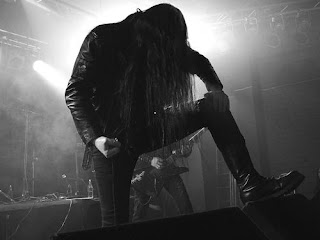 Since it's inception in 1996, Nargaroth has consistently released albums that are tributes to early 90s black metal. Their style, never really shifting beyond the aggressive, almost primal, sounds of some of the genre's figureheads. This new album has garnered the band a bit more praise than previous albums for a more adventurous take on their style, I'm hoping that's true.
I have to say that I have never cared for the albums that Nargaroth has released up to this point, as they rarely did anything above average black metal in the style of early Mayhem and Darkthrone. Sure, some of the material, whether intentional or not, was comical at times, in a good way, but others were just plain bad and boring. This album opens with a six minute ambient/symphonic intro that really doesn't do much for the album except give it an odd sense of atmosphere that the rest of the album is left to try and live up to. That atmosphere, really doesn't go away after that intro, in fact, it all but consumes the metal aspects of the band's sound, hear a track like A Whisper Underneath The Bark of Old Trees.
I'll be very up front here and say that this album really didn't impress me all that much. Most of the sound on here is definitely in a more ambient realm than a metal realm, and even when the metal side is more dominant, it doesn't usually do anything impressive. This is a pretty slow, monotonous, and brooding record that focuses a lot more on atmosphere than really any other aspect of the genre, and in that regard, is similar to some of Burzum's material. The almost electronic oriented sounds that wind up appearing on tracks like Diving Among The Daughters of The Sea or March of The Tyrants really is something different for the genre, but it's not like it's so great that it should be praised, in my opinion.
Overall, this was not a release that really grabbed me. I find it hard to really want to put on a record over and over again when it doesn't really have anything exciting within it. If you're into more ambient based black metal, check this out, but it's definitely not an essential release to me.
Overall Score: 3.5
Highlights: Spectral Visions of Mental Warfare
Posted by maskofgojira at 8:35 AM