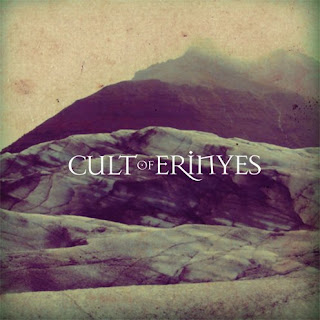 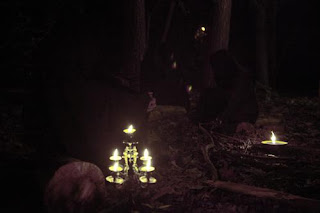 Coming from out of nowhere, Cult of Erinyes just appeared on my radar one day and just made me look twice at them. The few bands that I've heard them compared to interested me as they all differed in sound. I've seen the industrial black metal to more blackened death tags being thrown at these guys, so why not see what this is.
Despite being tagged as simply black metal by the blogs that I've seen it at, this album is certainly more than that. While retaining the black metal sound, there's definitely a lot of other sounds and plenty of experimentation going on within this record. In addition, I kind of had the feeling that this album would probably be a bit more adventurous than the average black metal record, as the cover reminds me of something I might see from a Neurosis show. This really didn't contain a whole lot of the sounds that I had been led to believe were going to be on here, so it did prove to be quite a surprising and engaging listen.
When you dive into this record there's a lot to be found, sure, there's the really fast and brutal black metal stuff, but there's stuff that sounds more akin to groups like Neurosis or Enslaved at times as well. By the second track, things like tempo variations, atmospheric interludes, strange sound effects, and warped vocals all begin appearing, Island. The drumming on here definitely has to be complimented, as the fills on these tracks are great, and they're anything but average when compared to other black metal bands, or most metal bands to be accurate, hear Velvet Oppression. Is this a good album, yes, is it an exciting album, yes, is it a consistent album, somewhat, and that's probably one of the few bad things about this in my opinion, some of these tracks are fantastic progressive/experimental black metal or ambient tracks, hear Permafrost, but there are a few on here that aren't up to the same standard, A Thousand Torments is the main culprit here, not really sticking out as anything different.
Overall, I'd have to say that this album really impressed me, as I wasn't really expecting all that much from what I had read on their description on blogs, but was pleasantly surprised. This is definitely some cool and exciting stuff that more people should definitely check out. Look this band up and check out this album for sure.
Overall Score: 9
Highlights: Insignificant, Velvet Oppression, Last Light Fading
Posted by maskofgojira at 7:25 AM