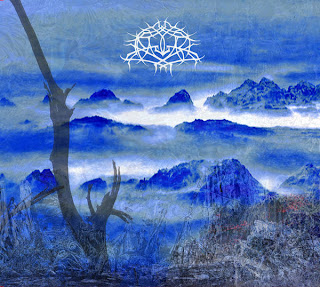 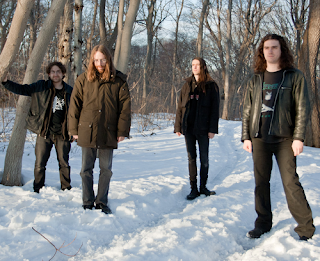 Since it's inception in 2007, Krallice has released two of the most forward-thinking, avant-garde black metal in years. Blurring the lines between progressive metal and black metal to the point where it's hard to tell where brutality begins and shear wankery ends. With each release their sound has become more and more well crafted and refined, with this new one focusing their sound even more so.
I remember reading an interview with the band recently and being surprised and disappointed by the fact that Mick Barr said that the band were going to make use of shorter songs while embracing a more death metal influenced sound. It was only after more info was released that I calmed down, as it was the shorter songs rather than the death metal influence that had me a bit worked up, but half of this album's tracks are still over ten minutes. Now, while I'll say that there's a bit more embrace of a mid-tempo sound, about 85-90 percent of this record is typical high-speed, technical black metal. Tracks like The Clearing and Telluric Rings are done in the band's typical progressive black metal fashion, but there are also tracks like the title-track, Diotima, where the band do slow things down for a little bit, and slow is a relative term here.
One of the more noticeable shifts on here is definitely in the vocal department, where Barr's throat-shredding wails still remain in tact, the majority of vocals are now performed by bassist Nicholas McMaster, who's style is much more of a low roar. I'd definitely say that unlike the last album, 2009's "Dimensional Bleedthrough," this album is a bit easier to swallow, but it's still something that you're not going to get on a first listen. I'd say it's arguably their most "melodic" record yet, as it isn't quite as weird as "Dimensional Bleedthrough" or as intense and the self-titled record. Despite the long lengths on here, and this really applies to all three records here, but most of them never really feel all that long, as the music has so much energy and there's always something going on, it's almost impossible to get bored listening to it.
Overall, what can I say that hasn't already been said about this band and this album, except for that I think it's great. This is definitely more accessible than their previous two records, but still far from being "mainstream." Definitely look out for this record, you won't want to miss this.
Overall Score: 9
Highlights: The Clearing, Litany of Regrets, Telluric Rings
Posted by maskofgojira at 12:30 PM