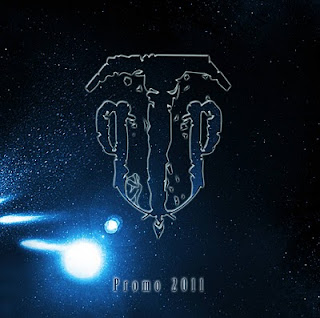 A recent exploration, or fascination, for me has been looking into groups that make use of a more astral vibe in their sound. Most of these groups usually turn out to be in the realm of black metal that makes use of a heavy ambient and atmospheric passages in their sound. This promo caught my attention with it's longer song lengths and seeing it around a few blogs.
I guess the most interesting part of this album, though there are a few points to really address for that, was the guitar riffs, there were actual riffs being utilized that stuck with me. Unlike a lot of other groups within this sort of style, the guitars do provide something memorable instead of a backdrop, of sorts, for the atmosphere. The atmosphere has to be addressed as well, as it certainly sounds as though this duo really tried to capture that cosmic feel, which I'd say the succeed in more instances than they failed. There's certainly an almost industrial flavor in the atmosphere that pops up here and there in both of these tracks, but I think that that is something that really makes this band stand out. While I did find the drums and vocals to be a bit too far back in the mix, that one fact didn't ruin these tracks for me.
Overall, this is a solid debut release and definitely shows a lot of promise for this duo. A full-length is hopefully in the works and will hopefully only expand on this sound. If you like atmospheric, industrial-tinged black metal, don't hesitate to look for this.
Overall Score: 7.5
Highlights: Sinapsi Divelte
Posted by maskofgojira at 10:12 AM