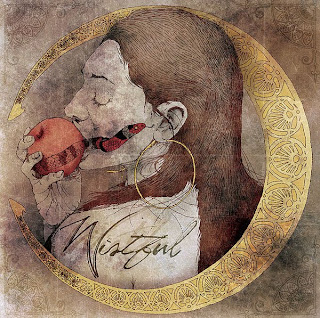 I think I could say that I'm a fan of a lot of groups/projects that are lumped in with the whole post-black metal/blackgaze movement. Surprisingly though, while cover art is usually what attracts me to records of bands I've never heard of before, it wasn't the case with this. What intrigued me about this record was its inclusion of a Dead Can Dance cover.
From the get-go, I think it can pretty much be anticipated at this point that most new bands/projects from this sub-genre aren't going to be reinventing the wheel. What you get here is some nice, melodic, at times dreamy, black metal. It's certainly not going to have your jaw on the floor, but there's just a unique air about this recording that just puts it above so many others. I also think that the vocals on here stand out a bit more than other groups as they do have more of a personality to them. Enigma of The Absolute, the Dead Can Dance cover, is actually a pretty decent cover, and the clean vocals are actually really well done and make me wish there were more on the rest of the album.
I find the melodies to really be a lot more attention grabbing than what the distorted guitars are doing most of the time, hear the bass line in Ethos for example. This is pretty accessible stuff, in my opinion, it's not too distorted and it's very "poppy" in its choice of melodies, hear Anagoge. Now, there is still very much the black metal guitar sound on here, some tracks do feature tremolo picked metal parts more prominently than others.
Overall, this is a pretty solid debut release with some nice melodies on it. Definitely one of the better releases to come out from this sub-genre this year. Once again, it's not totally original in it's craft, but it's catchy enough and has a cool personality to it to make it well worth checking out.
Overall Score: 8
Highlights: Ethos, Anagoge, Neos
Posted by maskofgojira at 10:01 AM