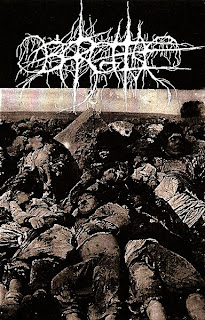 Who doesn't love a good fist in the face every once in a while, musically speaking anyway. Raw, crusty, death metal influenced black metal from down South is what I came in expecting from this record. Matthew Thudium of Thou is also a member of this band as well.
If you like your black metal aggressive, blasting, raw, and distorted, you'll be in for a real treat with this record. This thing sounds like it came straight from the mid-90's scene, recalling sounds fans of Darkthrone, Horna, and Mayhem with hints of Emperor and Ulver here and there as well. It's a record where it's all about attacking relentlessly and just demonstrating pure ferocity. This isn't to say that there isn't a sense of melody on here, as tracks like The Rite of Isolation definitely prove that to be fact, but there's a definite lack of focus when it comes to write a memorable melody rather than creating a dark and oppressive atmosphere.
I think by now it's pretty obvious that if you like your black metal to sound polished or clean in any sense of the word, you'll be disappointed by this. A track like Pain of Days sounds like an utter mess when you compare it to a band like Enslaved, but on it's own stands to be one of my personal favorites on here. The tremolo picking, howled vocals, and crusty production really give this a live feel, though I would venture to guess that these songs would be even more atmospheric when performed live. In a case like this, it's the type of thing where I feel this sort of material is best presented live instead of on a recording simply do to the lack of a real sort of electricity that can kind of make these songs grow a bit tiresome after a while, in my opinion anyway.
Overall, I found this to be a decent album, not great, but definitely bad at all. If there's one thing to be said about this album, it's that it is consistent, it's fairly short and manages to get it's point across easily enough. If you like old-school black metal, I don't see any reason why you wouldn't be able to dig on this.
Overall Score: 7
Highlights: Hellish Entrancement, Reduced to Ashes
Posted by maskofgojira at 11:19 AM