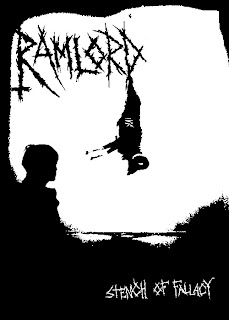 As some readers may already know, I'm a fan of metal when it has a punk attitude or mentality that can be felt through it's music. Black and sludge metal are more often than not, the two styles that I get this vibe from the most, because I don't listen to a lot of new thrash metal bands. This debut release from Ramlord I found on an a blog and totally peaked my interest.
After a short doomy intro, Wolves of Isolation bursts into a lo-fi black metal vibe, unfortunately, it doesn't carry with it the same weight I had expected or wanted. The vocals seem to just tear apart most of the music, as there are times when they just push everything else to the side in order to take center stage. The lo-fi aesthetic doesn't work as well in this case only because the nessecary power I like the punk influence, or sound, to have is reduced to sounding like mud for the most part; but I will say that some tracks like Greedkiller (Enslaved By Wealth) do stand out as having the sort of energy I like to hear. Musically, instead having a sort of punk vibe, all I hear is some melodic black metal mixed with sludge, which would be fine if the production was a bit stronger, but on here, like I said, it sounds like mud.
Overall, I was disappointed with what I ended up hearing from this, I really expected something better. What's on here feels a bit scatterbrained and messy and the lo-fi just doesn't work for it. If you're into sludgy black metal, check this out, but otherwise it probably won't do much for you.
Overall Score: 4
Highlights: Greedkiller (Enslaved By Wealth), Total Doom
Posted by maskofgojira at 10:18 AM