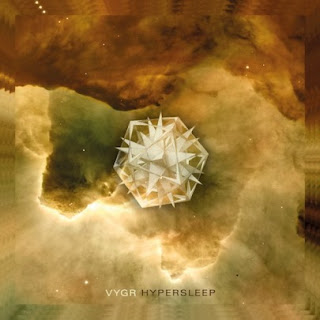 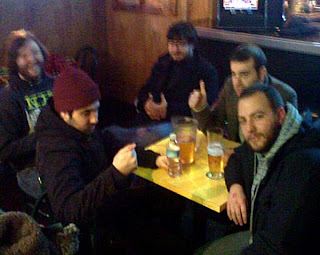 Apparently having a name like Voyager is too common these days, so after their debut EP, 2008's "Voyager," this five-piece changed their name to VYGR. This is their debut release under this name shorting and caught my attention through another review. It said it was pretty spacey while retaining a lot of the post-metal heaviness, something I always like to hear, spacey rock with some power.
What immediately stuck out to me on here, that separated it from a lot of other post-metal/rock groups I've already heard, was the amount of what I would describe as "brute force." For me, the sludge vibe on here is certainly very prominent, so the heavier aspects of the band's sound shine through more than the softer more atmospheric moments, though those moments do pop up more and more as the album progresses. You'll find that even in the softer tracks, if it's not an interlude, have heavier aspects to them, even if atmosphere seems to be the most prominent part of the given track, hear Galactic Garbage. There's also a good sense of melody on here that definitely calls back to an almost melodic death metal vibe at times, hear The Hidden or Shapeshifters due to their use of melodic guitar lines and great harmonies.
At the core though, is still a post-metal group with a love for all things astral and spacious. The sound on here still maintains a very firm grasp on groove and atmosphere despite having plenty of melody and progressive tendencies. Like I already said, this record based more in heavier side of the post-metal/sludge sound so you'll get a lot more of a "metal" sound while still having plenty of variety, hear We Drift. It's nice to see a band stay connected to their roots, I guess, as well as branch out.
Overall, this is a solid first full-length, plenty to like about it, and quite a bit of diversity as well. This is not by the books post-metal/sludge, it has it's own personality, maybe still a bit unrefined, but still well crafted. If you like post-metal/sludge or are looking for a way into the genre, I think this would be a good starting point.
Overall Score: 8
Highlights: Galactic Garbage, The Hidden, Event Horizon
Posted by maskofgojira at 7:20 AM