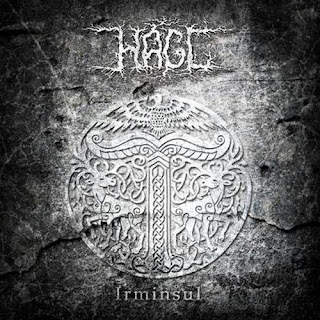 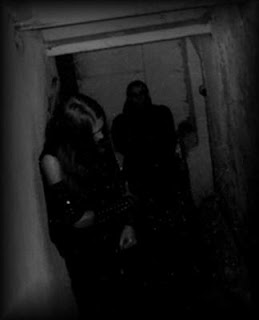 NS Black Metal is something I have tried to avoid in my adventures, if you will, through black metal, as it's something I do not agree with. Though some bands stick out within that "style," I find most to be rather boring and unimaginative with their craft. The reason I mention this first is the fact that Hagl features members of M8L8Th.
This opened surprisingly well, as an intro track usually begins an album with a softer start, Интро begins with some solid riffing before diving straight into Драккар. It's a melodic sound that you'll find on here, but one that still recalls plenty of the old-school spirit of the early 90s and late 80s black metal scene. I wouldn't call this forward thinking or even original, but what's done on here is pretty straightforward and is pretty immediate, so it's easy to latch onto, hear Инструментал. It's actually surprising to me as to how much of a thrash influence is present on here, as most bands that I've heard from Russia don't exhibit much of that at all. There are also hints of screamo, the good kind, on here on a track like Молот, though I'm not sure if that was intentional.
The production on here is really good, surprisingly, this is being based solely upon the other bands that I've heard from Russia, and I have not heard them all. It's clean, but not pristine, you can still hear raw sounding tones that stop this from sounding accessible. It's also pretty short, being just over half an hour in total, each of these songs are only about three or four minutes for the most part. I think that this is a good record to start with if you're looking to get into the Russian black metal scene, in my opinion.
Overall, I was pretty impressed with this album, it has some really solid riffing on here that's all pretty memorable. Once again, the band could do better in terms of originality, but that really doesn't seem to be a focus for a band like this, these are songs that are just good to headbang to. Definitely check this out if you like some old-school black metal or blackened thrash.
Overall Score: 7
Highlights: Глубины Сознания, Ирминсула Высь, Ворон
Posted by maskofgojira at 7:00 AM