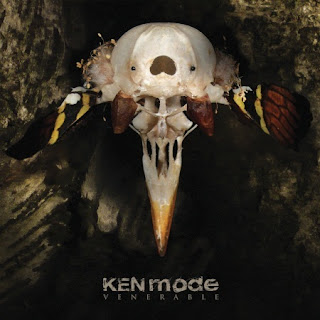 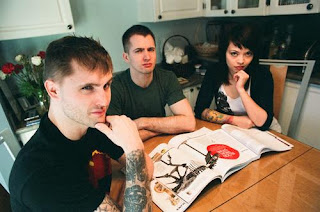 Despite being around for over a decade, this is my first meeting with the Canadian outfit KEN Mode. I only learned of their existence through Profound Lore, one of my favorite labels, and since I check out almost everything that comes out on that label, this would be no exception. It was only after finding this album that I went back and heard some of their older material as well.
Upon pressing the play button, this record's opening bass line groove and vocals instantly reminded me of Poison The Well. The heavy grooves, the dissonant and angular guitar lines, and the yelled vocals bring PTW to my mind immediately, and not in a bad way. Tracks on here also contain a similar sense of urgency that PTW have made use of in their sound, hear tracks like Book of Muscle and Batholith. However, I've read that comparisons to groups like Today Is The Day and Jesus Lizard are also comparisons that are often said as well, which can both be heard in the more spastic moments of the album, A Wicked Pie for example.
Personally, while I found the drumming just short of amazing and the guitar playing pretty damn cool, I have to say that the bass work was the highlight of this album for me. The grooves laid down on here are just great, Flight of The Echo Hawk is a great example of how the bass is used on here, melodic and tuneful while still being an integral part of the rhythm section. The bass also adds the extra oomph, if you will, to the album, giving it that added bit of heaviness that a track like Never Was otherwise might be missing.
Overall, this is a very solid record with a ton of replay power. Noise rock is something that I've only recently started exploring and have already found what I like and dislike about some of the bands, but this I like. If you're into noisy, chaotic, somewhat metal sounding punk rock, definitely do not hesitate to check this out.
Overall Score: 8
Highlights: Obeying The Iron Will..., Never Was, Mako Shark
Posted by maskofgojira at 10:29 AM