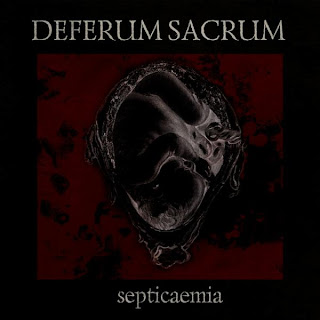 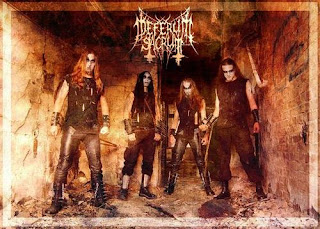 I don't have a lot of luck when it comes to finding good bands from the Ukraine. Most bands from that area tend to have pretty bad production, even by black metal standards, and are musically uninteresting, though there are exceptions to both. I'm hoping this band might prove me wrong.
Surprisingly, this comes off like a modern take on traditional black metal, nothing too out of the ordinary. You can easily hear the influences from groups like Emperor, Mayhem, and Rotting Christ on here, with more melodic mid-tempo assaults taking over a consistent blast, though there are still plenty of those parts as well. Due to it's more ebbing and flowing structures, it does help provide a sense of progression on here, with some parts definitely sticking out more than others, hear tracks like The Crawl or Crown of Degradation. Though there are still quite a few tracks on here that don't really do much of anything for me, All Living Fades isn't a bad song, but really doesn't attempt to explore anything different from your typical black metal band. I found that the occasional death metal influences that came out on here were well done and used effectively as well.
I think my main problem with this album is just that I've heard this done time and time again, it's not really anything unlike the other hundred of corpse painted legions out there right now. Having said that, I do have to say that there aren't a lot of bands that sound as polished and well-crafted as this one is, as I stated in the beginning. I will also give the vocals on here a good nod as well, as they bear a resemblance to Emperor front man Ihsahn at times. The instrumentation on here is also far from bad, it's just lacking in the originality department.
Overall, this is a decent album, by no means a bad album, but nothing special. Fans of the old-school, early 90s band should definitely get a kick out of this disc. Once again, if you like black metal done fast, hard, and brutal, look this shite up!
Overall Score: 6.5
Highlights: The Crawl, Emasculating Touch of God, Mass Suppression
Posted by maskofgojira at 11:34 AM