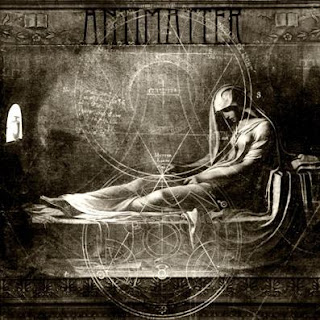 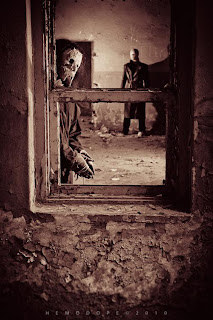 Avant-garde musical style that is very broad and somewhat eluding, as you never can tell exactly what you're in for. Putting that side by side with a band already termed industrial black metal, it makes for an interesting combination. Being sophomore release, and I know that several band members left before this album was recorded, it'll be interesting to hear how it sounds compared to the debut.
Coming off like a hybrid of progressive metal, black metal, industrial metal, and ambient music, what you'll hear on here will be an interesting experience. There are frequent changes throughout a given track, opener Kinetic Dogma for example, moves through phases of blasting black metal to slower and more atmospheric section and then back, which does brings plenty of interesting ideas along, as this actually differs for every song. There's also plenty of interesting riffing going on here, often breaking from traditional tremolo pick to go into more progressive areas. You'll find a solid amount of interesting ideas circulating throughout this disc, but I will say that this is not for everyone, there's some very trippy sounds going on in here that definitely make this a bit more of an experience than just a regular listen.
Despite being progressive this record maintains a very aggressive and brutal sound, which could be attributed to the industrial side of them, as a good portion of this album is done with blasting drums and fast-paced black metal style riffing. Tracks like the title-track, Antimatter, or Eternity Is Pregnant prove to be extremely focused on dense harmonies and abstract riffing combined a consistent level of brutality, which acts as a sort of paradox to the more, what I would call traditionally, progressive tinged sounds heard on tracks like Metatron and The Waters. Personally, I enjoyed the latter half of this album, only because the band dive further into the progressive sound that makes use of clean vocals, guitar soloing, and sections that are more straightforward.
Overall, this was a decent record, but I still think it has room to grow on me. It's a record with a lot of layers and different sounds going on as well as a lot of different uses of progressive metal. If you like experimental black metal, definitely check this out.
Overall Score: 8
Highlights: De Magnum Opus Solis, Metatron and The Waters, Theophagia
Posted by maskofgojira at 10:37 AM