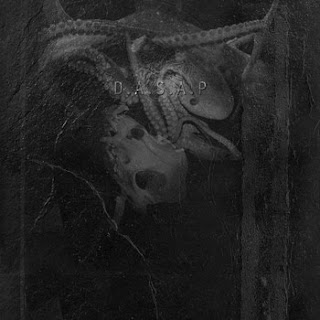 Blackened sludge is a genre I do happen to have a fondness for, for some reason, I wish I knew. Going simply based off of the fact that the other doom/sludge acts that have released albums independently have been superior to many other records in other genres, why not try this one as well. Besides that and the little bit I had heard from this before hearing it, the cover art is pretty cool as well.
Unlike what I would have expected to hear, from a production standpoint anyway, this album has a cleaner, though I use that term still fairly loosely here, sound that doesn't give the album the necessary grit and grime that I usually like in my sludge records. Having said that, the black metal element of project definitely seems to have a more prominent role in the sound as well, opener Yet Decayed definitely shows that. This is an album that definitely has elements of sludge, but appears to have a much more black metal foundation, but then obviously builds upon it with other things as well.
Overall, this is a solid debut EP, there's a lot of promise on here. While I would personally up the sludge elements in here, the black metal portion of the sound is definitely top-notch for a new artist, and a solo one at that. If you're into more mid-tempo sort of black metal with a heavy atmosphere, definitely check this out.
Overall Score: 7
Highlights: At Last, The World Ends Here
Posted by maskofgojira at 11:16 AM