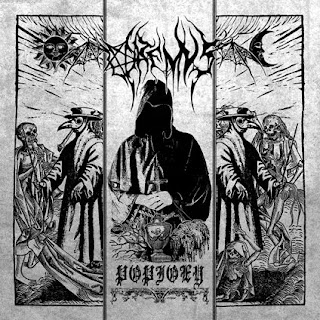 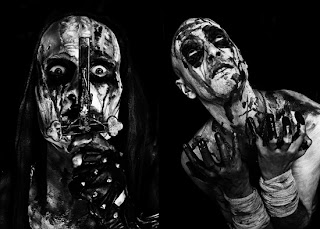 Last year I reviewed the debut from Blaze of Perdition, a black metal band with two vocalists, an album that did impress me quite a bit. This year, two members of that group teamed up to write an album for a side-project. This is that debut which brings the orthodox black metal sound back from their more modern sounding main band.
This four song album, sonically, takes the listener back to the days of Mayhem, Darkthrone, and Beherit, meaning all brawn and atmosphere, no progressive structures, melodic solos, or folk interludes. This is definitely an album that defiantly takes a stance to remain trve and kvlt to the last seconds. From a production standpoint, I'm very impressed with this disc as it maintains a very aggressive sound but also has a great atmospheric side to it, but neither one really dominates another. It's a modern take on traditional 90's black metal.
However, while being extremely well crafted and performed, this album just doesn't have the same uniqueness or memorability that other groups like Watain or Naglfar have. Sure, the intensity, the passion, and the atmosphere are all there, among other things, but it didn't really pop out and wow me as I might have liked it to. Even though opener, The Seventh Seal, does open the album up in a fairly epic fashion, it doesn't really do anything in it's eleven minutes that most bands couldn't do in a track half as long.
Overall, this is a decent album, but one that could definitely use a dose of originality. I would definitely say that their main band has a much more unique approach to black metal than this project does. If you're into a more traditional take on the genre though, don't hesitate to check this out.
Overall Score: 6
Highlights: Ashes, White Faces
Posted by maskofgojira at 9:57 AM