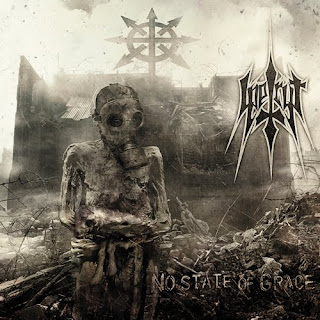 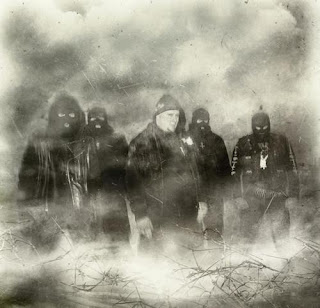 Iperyt is a band I've been peripherally aware of for a couple of years now, having heard of them, but never really listened to their stuff. I found them by searching industrial black metal, when I went through a phase where I was looking for a lot of them, but never ended up listening to them. This new album comes five afters after their debut.
Industrial sounding metal is a very interesting genre, as the title itself doesn't really have a specific sound that immediately comes to mind, it's a pretty broad genre name. Upon hearing the intro to the title-track, No State of Grace, it becomes clean that this band takes a sound somewhere between the heaviest and most pounding moments of Fear Factory and the colder and mechanical atmospheres of Dødheimsgard, an interesting sound indeed. In a way, there's also a little bit of a Rammstein vibe to the riffing, in that it's not really all that complicated, the riffs are more simplistic and thrash oriented, just hear The Player. It's vicious and blasting, but with plenty of variation and catchy riffs and choruses.
If you're looking for the most obvious industrial sound though, it'll be the drumming, or more specifically, the double-bass work, which comes out sounding like a machine gun going off. The use of samples, ones that mainly relate to war and death, on here also help to bring that vibe of industrialism. Tracks like Blades of Malice and Scorn and Nuclear Mornings definitely bring a more towering sense of sonic architecture, or a more unique approach to songwriting which includes a lot more catchy riffs while moving into different directions at the same time.
Overall, this is a solid album with a lot of great and catchy moments. Songwriting could be a little bit stronger, but for where it is now, it's still very well done. Definitely check this out if you're into industrial metal at all.
Overall Score: 8
Highlights: A Pocket Size Armageddon, The Antithesis, Into The Mouth of Madness
Posted by maskofgojira at 8:21 AM