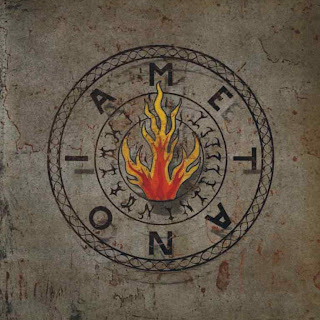 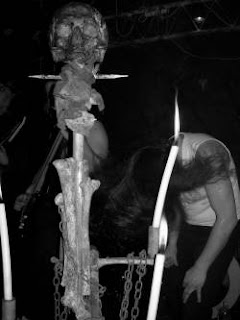 Traditional sounding black metal, while awesome in itself, I personally enjoy a lot more when new elements are mixed with it, just being honest here. Upon stumbling on this album, and thinking that a band has songs that mostly top the eight minute mark is automatically cool, I checked out their debut. With these two albums, this band definitely try to do something different from the rest of the pack.
What you'll find on here is uniquely strange but very traditional as well, it's a sound that is somewhere between being original and derivative of the original style of black metal. The sound on here consists of, what I heard anyway, a mixing of melodic and more traditional black metal with elements of progressive metal and more abstract sounds that are comparable to groups like Blut Aus Nord, Deathspell Omega, and The Axis of Perdition. This is certainly not an album that fans of super kvlt sounding records and bands will most likely get into simply due to the more dissonant and harmonious sounds that pop up throughout the disc. There's just way too much of a deviation from straightforward blasting and assaults that other underground acts on here to really satisfy any sort of need for a traditional black metal, just hear the title-track Metanoia.
One of the things that stuck out most to me on here was the drumming. I found that there was a lot of different things being done on the kit that kept me interested in what he was doing, you'll hear traditional blast-beats and a lot of double-bass work, hear Smashan Tara, but also some more progressive sounding fills and more tribal oriented percussion at the end of every track. But as a whole, I do believe that without the rest of the music, the drums won't stand out like they do.
Overall, I really enjoyed this album, there's still a bit more work for a truly original sound, but this has enough original ideas to keep me, and I'm sure plenty others satisfied. The fact that this is only a sophomore release and the band has already come to have a sound that recalls elements of the bands mentioned above is truly a feat in my eyes. Definitely and album to not be overlooked this year, check this out if you like experimental black metal.
Overall Score: 8.5
Highlights: Ahamkara Defeated, Dispensation, Smashan Tara
Posted by maskofgojira at 7:07 AM