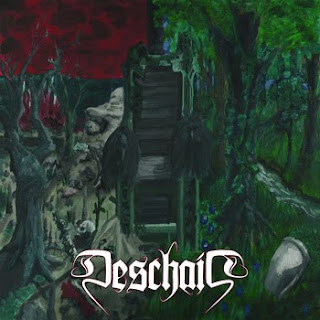 This debut album from an Indiana trio really came out of nowhere and took the underground by surprise last month. I've seen it on numerous blogs with people saying fairly positive things about it, so it intrigued me. Why not want to hear an underground band doing something new.
What you'll hear on here is definitely intriguing sounding, as it's a very different sound for black metal. Most of this band's roots obviously lie in black metal, but there are obviously hints of death and progressive metal in here as well, adding enough variety, and justifying the long song-lengths. Having said that, tracks like Ashes feel a bit over-extended and do feel like they could have been cut down by a few minutes. The songwriting is very strong on here, with plenty of catchy, melodic sounding riffs going on throughout these songs, hear a track like Destruction of Seasons. More than half of this album is instrumental as well, so you'll be happy to know that if you like the musicianship, it's well documented.
The production on here is pretty weak on here in my opinion though, and it does harm the overall impact that this release has. In my opinion, the drums are just way too clicky sounding, and it makes it sound too much like a drum machine, which I don't usually have a problem with, but this sound just really annoyed me. Another thing that bothered me was that occasionally when the guitar playing went into some sort of proggy sounding part, the production tended to dip and it would suddenly drop from being on top of the mix and start falling into the background for some reason.
Overall, besides maybe being a bit long and some bad production, this is a really solid debut album that shows a lot of potential. Definitely some original stuff going on here, with some nods to several great bands as well. If you like progressive black metal, take that any way you like, check this out for sure.
Overall Score: 8
Highlights: Upon The Oaken Throne, Black Horses
Posted by maskofgojira at 9:00 AM