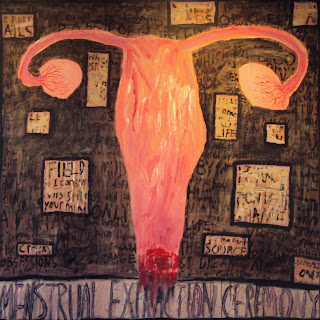 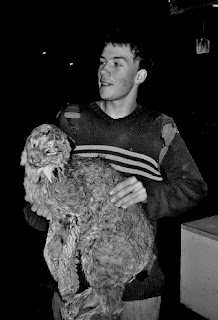 Brulvahnatu is a solo project of Kib Sreng who has been releasing his music under this project since 2007. In 2009 he released his debut full-length "Uterine Acid Swishes," which has since become a bit of an underground favorite. This is his third full-length and sees him moving into a more song oriented sound.
Where previous releases have made use of long epic songs, to the extent that there were only three tracks on the previous two full-lengths, this album makes use of a more "digestible" style. While the production still makes this album highly distorted and somewhat rough sounding, it's still melodic and quite memorable, hear Hunting Season (At An End). It's an odd assortment of styles, as the guitar riffs are done in a strikingly less black metal sound for a good half the album, while the drums tend to being blasting during most of it, and then you have the low guttural growls for vocals. It's a sound that's very unique but a little strange, as Liquid definitely showcases.
However, though the album is very consistent, I have to say that the crown jewel in here is the nineteen minute The Gland. This track just oozes progressive influences, from the jazzy saxophone lines to the blasting of the more straightforward black metal parts or even the doom section. I really can't say a bad thing about this track as it just contains everything right with this project. Even the drumming on here is done extremely well, especially within the last minutes of the track.
Overall, this is a pretty strong album that I was actually quite surprised by. This is definitely coming from an original place where catchy riffs, dense atmospheres, and progressive/avant-garde tendencies meets and fuse together. If you like experimental black metal at all, definitely check this out.
Overall Score: 8
Highlights: The Gland, Menstrual Extraction Ceremony
Posted by maskofgojira at 10:26 AM