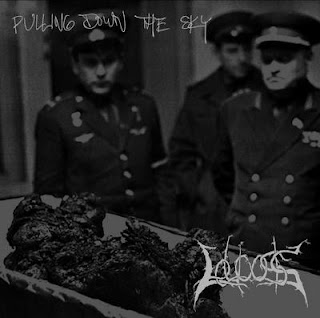 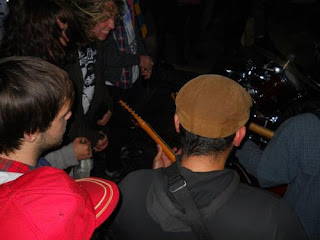 Leucosis is a three-piece that I'm not really familiar with, I have seen their album on a few blogs, but only recently decided to take an interest in it. Their cover art intrigued me as to what exactly they sounded like, as the term black metal is a very open term nowadays. I've read good and bad about this album, but nothing really formed a definitely sound in my head, so here's what I thought.
It's hard to really pinpoint an exact sound for this album, as it has a very different vibe to it. Musically, there are elements of black, doom, and death metal along with influences obviously coming from drone and noise music popping up in there as well. Due to the very raw production, and the fact of being a trio, the sound isn't all that full, I would imagine that it's how the band sound live. Most of it is heavy and aggressive, hear the title-track Pulling Down The Sky, but more melancholic moments do pop up on here every now and then as well.
I do have to give it to these guys for having a very authentic feel to these songs. Tracks like Approaching Lucidity and Incarceral Form feel very natural and almost free-formed in a sense, I guess organic would be a good way to describe them. Fast and slow sections are very well constructed and executed without making one feel too long or too short. Having said that a track like Hymn to The Forest of Pixels felt way too long for me and nearly put me to sleep.
Overall, this is a decent full-length record from a decent new band. I believe that improvements still need to be made for these guys to craft a truly great record, but this one certainly is above bands with better production and worse sounds. If you like raw sounding doomy black metal, look out for this release.
Overall Score: 7
Highlights: Approaching Lucidity, Incarceral Form
Posted by maskofgojira at 10:32 AM