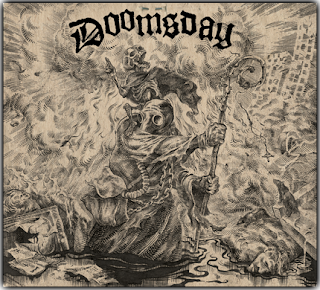 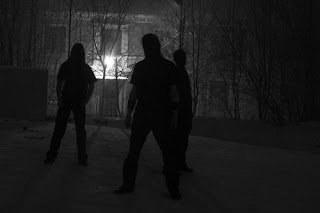 I haven't looked into Russian black metal all that much this year to be honest with you. Last year I looked into the country's scene quite a bit, though I have to confess a lot of it wasn't very good, or it was just passable. This record caught my attention however, because of its stance as a purely old-school black metal record.
I have to say that the production on here is stellar, it's raw, but very clear sounding. It's a very modern sounding record, it's obvious that it was recorded recently, but it retains an almost crusty vibe, like that of a grindcore or crust punk act, at points I would have guessed that Kurt Bellou recorded this. Screeches of feedback pop out at times, just giving this record that in-the-moment feel to it, hear opener Atom's Radiance. But like I said, this record is also clear enough to hear everything being played, which, compared to the other Russian black metal records I've heard, is a good thing.
This is not as defiantly old-school as I thought it would be, though it certainly is more traditional than a lot of other bands going forward in the genre these days. It's a record that focuses a lot more on the attack, making use of rampaging guitar lines that are just melodic enough to be catchy, but not enough for you to say this band is melodic. A track like The Black Sun shows just what this band is about, crusty black metal with just a bit of a death metal influence coming through, Warriors of Chaos being a prime example of that influence. Probably the oddball on the album is Sonic Waves, which makes use of some weird female clean singing which doesn't really fit with what the band's playing, but that's just my opinion.
Overall, this is a really strong album of semi-melodic black metal that is definitely a step above what a lot of Russian groups are doing with the straightforward style. It's not groundbreaking stuff, but what's being done on here is crafted very well and will stay with you. Definitely look for this if you're into this sort of crusty, melodic, black metal stuff.
Overall Score: 7.5
Highlights: Confession, Warriors of Chaos, The Revelation
Posted by maskofgojira at 11:23 AM