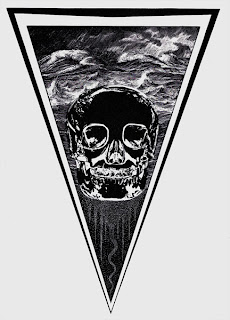 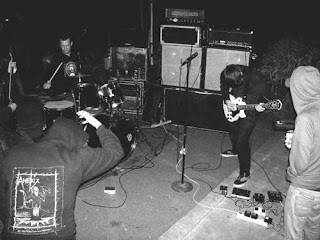 In the three years since their inception, California natives Ash Borer have been gaining quite a name for themselves in the underground circuit. Releasing their debut demo in 2009 and then a high profile split with Fell Voices and a tour demo last year, this full-length came as a highly anticipated release. The band's style has been praised by those willing to take them in for their sense of adventure.
Like their cohorts in Fell Voices, Ash Borer are known for writing long and epic stretches of music. This album is made up of only three tracks, two of which top ten minutes. I can imagine those not yet acquainted with the band having a difficult time getting past that alone, but if you can get over the initial shock of the long tracks, you'll find something quite fascinating.
The style the band make use of, both on their earlier recordings and here, is a breed of highly atmospheric and melodic black metal that blends just the right amount of post-rock, folk (or folk rock if you like), and psychedelia together into their own black metal concoction. It's a pretty relentless variation of the style, so don't expect this to sound like Alcest with longer songs, this is much more aggressive and brutal; but I have to add that what's on here is probably, depending on the person, more trippy and psychedelic than most of the "post-black metal" scene. But I won't want you thinking that this is just a blast fest, because there are moments of beauty and calm on here, the nineteen minute closer My Curse Was Raised In The Darkness Against A Doomsday Silence would never work if it was blasting for it's entirety; but it's due to the clever use of well placed keyboard atmospheres, great drumming, and excellently timed clean guitar breaks that allows a band like this to write songs that are much more cerebral while remaining ingrained in the consciousness long after listening. A track like Rest, You Are The Lightning is probably the easiest place to start on here if you're a new listener, but I would still recommend listening to the whole thing through, as it really is an experience that shouldn't be overlooked. The production is raw, but not lo-fi, so it keeps a very kvlt feel to, in case you had any reservations about the band going high-fidelity.
Overall, this is a great, I want to call it debut, that definitely should bring these guys to the next level of public awareness. It's definitely an original take, and hopefully removes them from the whole cascadian black metal scene. If you're into adventurous black metal that is definitely captivating, do not wait to check this album out.
Overall Score: 9
Highlights: My Curse Was Raised In The Darkness Against A Doomsday Silence
Posted by maskofgojira at 9:56 AM