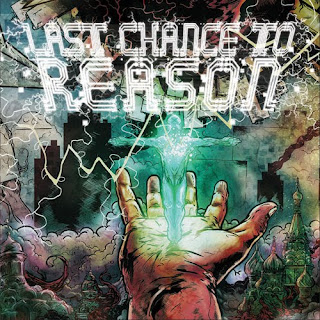 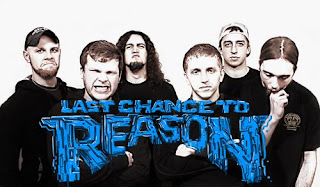 Unlike a lot of music that I've found recently, Last Chance to Reason I found a little differently. While scoring Youtube for tips on recording vocals, I found a video that the lead vocalist had made on their bandpage. His recording tip turned me on to their page and then their Myspace page, where I became a fan.
Modern prog metal is a very interesting thing, what with the new djent genre popping up in the last few years and math metal becoming more and more popular, the genre has really gotten a boost. Last Chance to reason started out as one of those mathcore groups, think early Dillinger Escape Plan or Carbomb style, but have definitely evolved with this second album. What you'll find on here owes just as much to the two bands mentioned as well as groups like Between The Buried and Me, Cynic, and Meshuggah, so you'll get lots of stop-start grooves, a lot of quick technical sweeps and arpeggios, low guttural vocals mixed with Cynic-esque harmonies, and synthe solos.
Now, for the weird part, this album's concept is based on a video game that the band designed to accompany the album. It isn't hard to at least hear that influence coming through on here, just here tracks like Programmed For Battle or The Linear. Conceptually, it's not really my thing, but musically, this band certainly has it's own vibe, sure comparisons can be drawn to other bands, but these guys have moments of pure originality. The band also has an ear for when to go for a more melodic part, like the opener Upload Complete or when to go uber techy, like on Portal, there's a balance.
Overall, I really enjoyed this album and am looking forward to hearing more from them. I'm sure a lot of people won't be able to get down with either the clean vocals breaking up the technical side or the keyboards bringing in a more traditional prog sound coming in, but it all works in their favor for me. If you like technical or progressive metal, definitely check this album out, you won't be disappointed.
Overall Score: 8.5
Highlights: Temp Files, The Linear, Apotheosis
Posted by maskofgojira at 10:59 AM