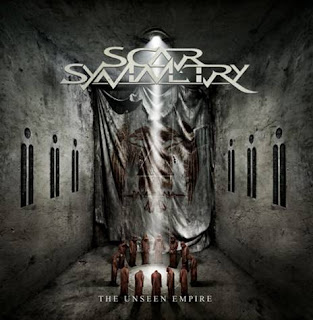 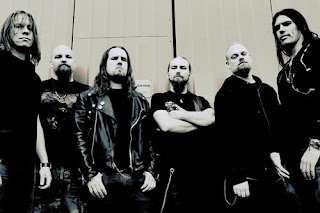 In 2008, Scar Symmetry released their third album "Holographic Universe," an album which wound up at the top of my 2008 albums. Since the release of that album, the band have gained two new vocalists to replace their former vocalist, and released "Dark Matter Dimensions." This new album follows that album up, focusing more of conspiracies rather than any sort of space oriented topics.
I think by now everyone knows the breakthrough "hit" for this band was The Illusionist from "Pitch Black Progress," well this album opens up in a similar way with The Anomaly. You'll hear a familiar sense of melodicism in that track especially, but looking back at their entire catalog, you'll notice that the band have always opened their albums with great openers, at least that's my opinion. Where this album differs from the last one is in it's more melodic approach, think somewhere between "Holographic Universe" and "Dark Matter Dimensions," as there's a lot more singing on here, but also a lot more progressive guitar work, hear Illuminoid Dream Sequence.
The band really have a sound that has become their own, so you won't find a whole lot of deviation away from that sound on here, though I've read that a lot of people have been impressed by the improvement on the clean vocals. A track like Extinction Mantra is more of a typical song for the band, you have tracks like the more 80's rock sounding Domination Agenda, which the band have always done on their albums, but the more brutal approach taken on Astronomicon, musically speaking, definitely is a breath of fresh air. The clean vocals definitely have a more dominant role in this album, often giving even the most brutal sections a great melody. There's certainly no slouching in terms of songwriting going on here, the band are in top form and keep up the consistency they've always had in terms of writing catchy melo-death songs while injecting just enough of the prog elements to keep, at least me, satisfied and always listening. This is still leagues ahead of what most melo-death bands are doing right now.
This band has never let me down before and they haven't yet with this album. While my personal favorite remains "Holographic Universe," this album proves to be within the same league. Definitely check this album if you like melo-death with an injection of prog, you won't be disappointed.
Overall Score: 9
Highlights: Seers of The Eschaton, Rise of The Reptilian Regime, Alpha and Omega
Posted by maskofgojira at 11:41 AM