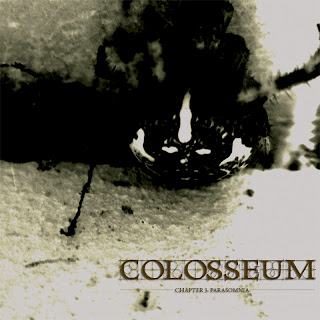 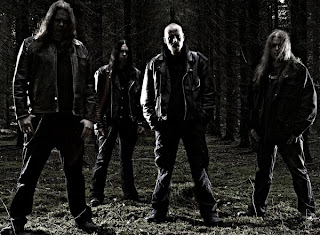 This is the final release of Finnish funeral doom masters Colosseum, as the death of frontman Juhani Palomäki early last year marked the demise of the band. This is supposedly the final compositions Palomäki made and thus his most current memories can be found in these five tracks. With over an hour worth of music, this trilogy of funeral doom with hopefully be held in a high regard and maybe even classics.
If you're at all interested in funeral doom, you'll know about Colosseum's first two albums, as they were both two of the most critically acclaimed albums to emerge from the genre in a while. Their sound is possibly a bit more unique from a lot of other funeral doom acts in that they don't restrict themselves to slow and really slow tempos, there's a bit more variation in here, though you'll never hear a thrash moment on here. There's also a better sense of melody and atmosphere, which is something a lot of groups and projects from this scene use, but often don't get right; and in my opinion it's the band's overwhelming sense of melancholy that really gets this darker, more somber and morose, feeling to their sound. I also find this band's sound to be a lot more enjoyable than a lot of other acts, as the opening track, Dilapidation and Death, is a towering twenty-one minute epic that doesn't even seem half that long.
While plenty of funeral doom groups make use of keyboards in their sound, this is one of the first that has made their sound so epic and majestic using them. Though the use of real cello and violins are used on here, it's the effect of them with the keyboards that simply just blew me away. The melodies on here also have a majestic approach to them, often going into the realms of traditional doom or even gothic melodies, hear Passage to Eternity. I also enjoyed the moments when the band mellowed out a little bit, hear the title-track, Parasomnia, where there's definitely a more atmospheric vibe that's being added due to the use of cleaner guitars.
Overall, this is a great funeral doom album that definitely outshines a lot of other groups and only shows what we are now missing. Definitely an album that will be respected down the line, as this is some of the best funeral doom I've heard in a while. If you like slow, doom metal, definitely pick this up, you won't regret it.
Overall Score: 8.5
Highlights: Dilapidation and Death, Parasomnia
Posted by maskofgojira at 6:32 AM