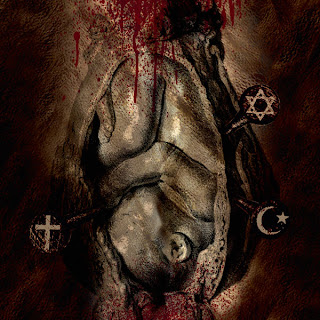 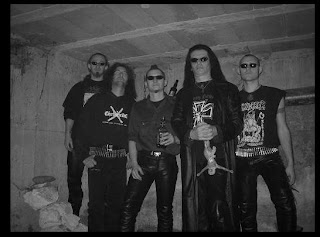 Personally, it's not often that I see an album cover that's so blatantly brutal and sacrilegious that I have to find out what it is. I'll say that most covers that are of the variety that I just mentioned are found more within the gore/porno-grind genres more than black metal. How could I resist something that's not and still manages to personify brutality with it's cover.
Having done a split with S.V.E.S.T might show you that these guys are a bit less ordinary than the typical black metal band. I'll say that it's certainly at least trying to maintain a certain level of intensity, but it morphs itself into something that bears, if only slightly, a resemblance to Deathspell Omega. Some of the riffs you'll hear are slightly more abstract or dissonant that the average black metal band, hear opener Reverse The Cross. The slower numbers, the title-track, Dysevangelist, also bring an almost twisted sounding atmosphere that compares to DSO into the equation as well.
But I have to say that the traditional vibe of this record is possibly what is creating the difficulty that I'm having with this record. About half, maybe a bit less, of this record has the potential to be a bit more dissonant or experimental, but the other half, or so, is the traditional side, which seems to just be a bland, uninteresting black metal that doesn't do anything for me. Tracks like Les Germes Du Pourrissement and Acid Inferno contain more, dare I say progressive, moments that I really wish there were more of on here.
It's quite a solid album, despite being their debut full-length, the band have been quite active since 2000. I could see this appealing to fans of both traditional and more experimental black metal due to the melding of elements, though I would have preferred more experimentation myself. If you're into bands keeping it kvlt while doing something a little bit different, look for this and you won't be disappointed.
Overall Score: 6.5
Highlights: Dysevangelist, Les Germes Du Pourrissement
Posted by maskofgojira at 8:42 AM