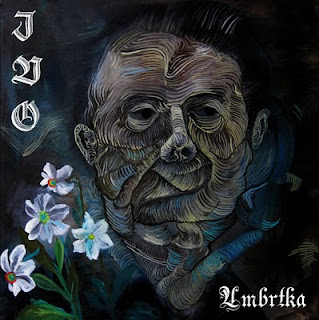 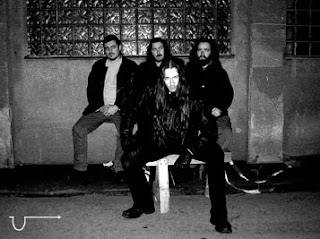 Apparently No One Told Them How Black Metal Is Supposed To Sound.

Umbrtka is an avant-garde metal group from the Czech Republic. This band has been releasing a steady flow of albums since their formation back in 2000. This is their sixteenth overall full-length and their second to come out this year.
Like any good avant-garde "metal" band, these guys don't know the meaning of the word boundaries. Throughout this record, these four individuals cease to stick to a single normal structure or style, instead exploring many of metal's sub-genres including death, thrash, folk, and black. Strangely, when the band go metal, in any capacity, the vocalist ends up sounding a bit like Niklas Kvarforth (Shining), which just struck me as being a bit different.
Most songs seem to dwell mainly within the metal genre, which for someone that likes avant-garde metal, isn't really the best thing in the world. There are a few moments on tracks like Nájezdníci or Pivo Ivo where they'll go into a more mellow part or bring in a saxophone, but that doesn't really make it weird, just different. I could imagine a fan of metal wanting to branch into avant-garde, metal at least, trying this out, but besides that, I couldn't really find a lot on this record that couldn't be found on a regular metal record.
Unfortunately, for all odd traits that are on here, it probably has to do with the use of a different language in the vocals as well, most of this album fails to stick with me. Tracks like Popelář and Doudlevce are decent enough songs, but there really wasn't any substance there to draw me back into listening to them again. This was a record that didn't really end up living up to what I might have imagined it to be; coming into this, I was thinking either really off-the-wall songs that were just weird or songs that were somewhat entertaining, I didn't really get either on here. Overall, I have to say that I was pretty disappointed by this album, it didn't really live up to my expectations. This album just didn't live up to what I pictured it sounding like in my head, sue me if you think differently. If you enjoy metal that's a bit different, while still sticking pretty close to being metal, give this a try, but there's better stuff out there.
Overall Score: 4
Highlights: Všechno, Petrohrad, Pivo Ivo
Posted by maskofgojira at 10:22 AM