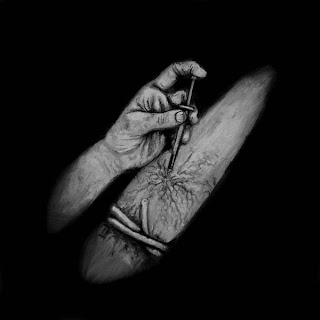 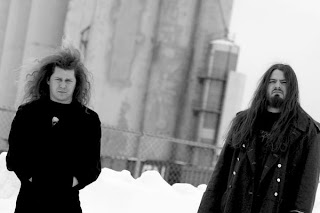 Murmur is a psychedelic black metal band from Illinois. This is their debut album and follows in fellow Chicago experimental metal groups with a unique take on an old genre. The two main members previously played in the black metal band Abstraction.
This certainly isn't an album for people that want something straightforward, as the intro track opens with a heavy drone. Traits and sounds like this only continue throughout the entire disc, mixed with black metal of course, but other elements are in there as well. Also, this is an album that relies very heavily on atmospheres and dissonance, as if you couldn't guess something like that just by the cover, so if you like fast, melodic black metal, more melody, less abstract, avoid this as well.
This album has a very raw production, the guitars just hiss distortion all over the mix, which can get a bit grating at times, but that actually adds to the distinct sound of this album. As well as elements of drone, elements of noise and martial industrial music also find their way into this album's unique sound. The riffs are not particularly the most pleasing and they often go into weird sounding sections that, hear Injektion - Präparat/Ritual, go into straight noise. There are also a lot of odd drumming, that particular track mentioned actually features a drum solo-like part before that noise. More ambient sections also manage to come in here and there on here, hear The Fall, that are actually quite entrancing despite the noisy soundscapes behind the vocals in that particular track.
But with all of that included, every track on here is at least half black metal, the other half experimental genre can be inserted here. A track like Laudanum keeps an almost Xasthur kind of song with an a similar aesthetic, remaining very harsh and distorted, but having a lot of atmosphere. This track is actually the most straightforward on the entire disc, with both tracks surrounding it containing a much more experimental sound to them.
Overall, this is a decent album with some cool experiments on it. I can't say that this album stands up to big shots, from Chicago, like Yakuza or Nachtmystium, but this is still solid. If you want to check out some black metal that's pretty weird, listen to this.
Overall Score: 7
Highlights: Injektion - Präparat/Ritual, Die Endlösung
Posted by maskofgojira at 9:03 AM