Kill The Client - Set For Extinction 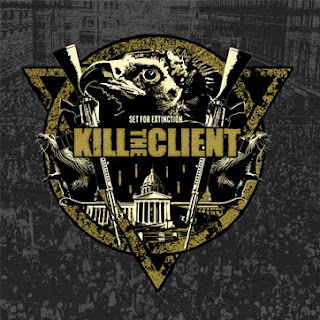 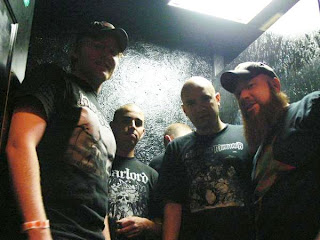 Kill The Client is a grindcore/deathgrind band from Texas. In their eight year existence the band have risen from underground noise makers to some of the most respected new acts in grind. This is their third full-length record.
If you have any reservations about music that's short, crusty, or aggressive, or all three, this is an album you'll want to avoid. Nothing about this album could be called melodic, progressive, or pristine, this is grindcore done right. What you'll find on here is a kick in the jaw of nothing but brutal and intense grind that refuses to relent. Once again, if you like your music to feature something that will be catchy or unique, look somewhere else, cause this thing is a kick is face. There's also plenty of feedback within these tracks, that will either blast you at the end of a song, or during a short pause, hear Death of Reality.
Not one song on this album is three minutes long, so that should give you some sort of idea as to how this album will go along. Several tracks are nothing but swirling aggression and anger, hear tracks like Questions to A Brick Wall or Final Days, and make it difficult to tell what exactly is going on. Not to say that every song on here is like that though, there are still a few tracks that are more straightforward and somewhat graspable, though, personally, I find tracks like that to last longer then a minute.
A lot of what's on here might require more than a single listen, as some of this stuff is so fast and noisy, it's hard to tell what riff is even being played, if it's even a riff sometimes. While tracks like Pandemic or Postmortem Exoneration, which are both longer, are a lot easier to make heads or tails of, most of this is kind of hard to figure out if it's a riff or just random technicality, though I'm sure this guy can play it live. What I found to be sort of interesting was that throughout this album, there was a persistent Napalm Death-like sound on here, the vocalist especially sounded like Mark "Barney" Greenway, but there's also some moments of brutal toilet bowl vocals as well, like in the track The Walking Dead.
Overall, this was a nice kick to the face after some more progressive stuff, that I've reviewed over the last few days. I can't really say that this thing is super technical or just super simplistic, both played really fast either way, but it's just what I needed. Definitely check this out if you want something fast, grinding, and aggressive.
Overall Score: 7
Highlights: Dig Two Graves, Vicious Slaughter, Primetime Dogma
Posted by maskofgojira at 5:20 AM