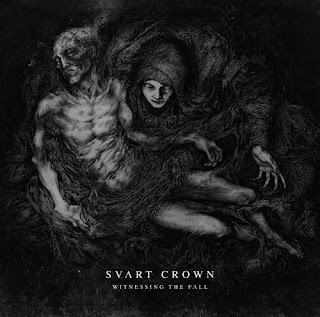 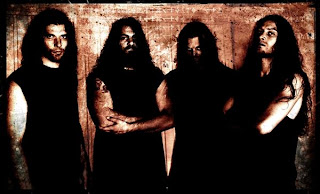 Somehow The Title Doesn't Seem To Paint A Happy Picture.

Svart Crown are a blackened death metal group from France. This is my first encountered with the group and thus, once again, I can only really comment on this album. However prior to this, they released a debut full-length back in 2008 titled "Ages of Decay."
Once this album opens, it starts something very rare, that I've heard, in black metal. I can't say I've heard a lot of black metal that tackle sounds of technical death metal, or technical music the way these guys have, as it can sometimes move into angular and odd sounding riffs, this is a plus by the way. The way this is done is often with intensity building up within tracks, rarely stopping to break for a breather, songs that tend to utilize this style are full-throttle, petal-to-the-metal, hear a track like Nahash The Tempter.
However, while this album is intense and aggressive, it also has a more melodic streak passing through it as well, often thanks to the more black metal sections that do slow a track down for more open sounding riffs. The death metal sections tend to bring a bit more of the technical aspects of the band out, but both the black and death metal sections work exquisitely together on this album. The riffs on here are also really catchy as well, enough to be memorable after a single listen, hear tracks like Into A Demential Sea or Strength Higher Than Justice. Unfortunately the worst part of this album, for me anyway, is the vocals, which sound a bit too "inhaled" for my own personal taste and is a style that I'm just not a fan of. The other gripe I have with this album is that a few tracks near the end of the album just don't measure up to the high standard of the opening tracks, but the final track, Of Sulphur and Fire, more than makes up for that.
This album is really just diverse while maintaining a constant death metal styled pace, riffs are constantly changing, the drums are blasting, and the bass is actually clear enough to cut through both. The vocals are a little bit behind the guitars, which worked well enough for me as they weren't really my thing, but it worked to put the guitars at the very front. The diversity however comes within longer tracks on here where the band take the opportunity to build on the songs a bit more, adding slower and more melodic parts than some of the shorter, faster songs use.
Overall, this album definitely surprised me, I didn't expect this record to be as good as it is. This is just another great, and actually original sounding record, to come out from the French black metal scene. If you like technical sounding metal, definitely give this album a whirl, you won't regret it.
Overall Score: 8.5
Highlights: Dogs of God, Into A Demetial Sea, Of Sulphur and Fire
Posted by maskofgojira at 11:53 AM