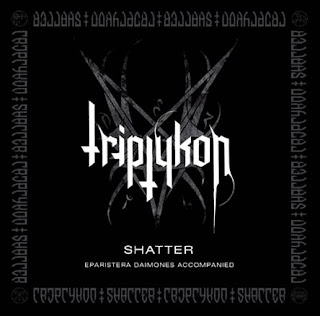 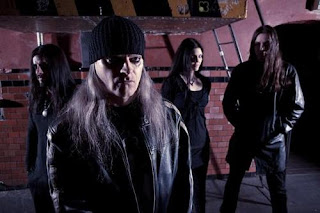 Triptykon is the reincarnation of legendary extreme metal pioneers Celtic Frost. The debut full-length release was put out earlier this year, this EP is a short extension of that album. Featuring three tracks that were recorded during the same sessions of the full-length and two Celtic Frost songs that were performed at the Roadburn Festival.
The three original tracks on here all feature a different side of the band while still retaining the same crushing heaviness that the full-length had. The title-track, Shatter, features a slow gothic doom sort of sound but is not as long as most of the tracks on the album; in addition to that, this track is also quite melodic as well, featuring a great, if not disturbingly catchy, hook. I Am The Twilight is the track that resembles the album the most, in both it's length and sound, while by no means being a weak link in this EP or the band's work so far, this is the track that is the most bland. Crucifixus was the first Triptykon song ever released and is pretty much an experimental industrial piece.
The two live songs are both Celtic Frost songs, Circle of The Tyrants and Dethroned Emperor. Both tracks, for being recorded live are very well mixed, as the band come out sounding very clear and precise while retaining an atmosphere that could have only happened live. The latter track features Nocturno Culto (Darkthrone) on vocals as well, an added treat.
Overall, this is a really solid release. While it's not really anything mind blowing like the full-length was, it's a nice accompaniment to it. If you like heavy, gothic, doomy stuff, definitely check this out.
Overall Score: 7.5
Highlights: Shatter, Dethroned Emperor
Posted by maskofgojira at 12:35 PM