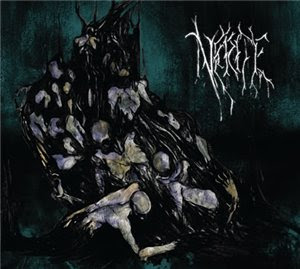 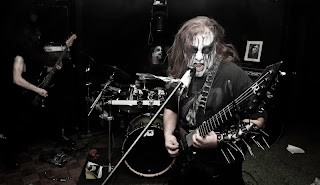 Like A Hammer Smashed Face.
Necrite is a California based blackened doom metal band. This is their debut full-length record, following a string of demos and single for the past few years. I recently discovered this group through an interview they did through a fellow underground blog, Lurker.
This is easily one of the darkest sounding releases I've heard all year, not the heaviest, most brutal, or fastest, no, the darkest. This thing calls upon elements of the already obvious genre titles, black and doom metal, but also elements of ambient, drone, and noise music throughout this five track affair. This album is over an hour long, with three of the five tracks going over ten minutes, that should give you a small indication of the sort of thing your in for if you decide to check out this album.
Sonically, all the elements listed above are in here, but the band make use of each of them through well timed shifts, whether it's from a raging black metal section into a more bleak and ambient soundscape, hear opener A Mass For The Harvest of Death, that honestly sounds almost progressive in how it shifts between the two, or in the closer Worship The Sunn ((O)), where the band focus on the drone and noise parts. It becomes obvious about half way through the opener to how much effort and time has gone into writing these songs to contain the right atmospheres and sounds. Each of these tracks can do one of two things, and it really depends how you approach this album, you'll either be bored to tears from the repetition and atmospheres or you become fully enamored with it as it draws you further and further in, I was of the latter.
While I personally found the longer tracks to be much more engaging and interesting, the shorter tracks do provide a bit of a different take on the band's sound, where, as mentioned above, Worship The Sunn ((O)) is a mostly noise/ambient track, and Bathing Open Wounds With Shards of Glass is dominated for the most part by the black metal side of the band. These shorter tracks, especially the latter one mentioned, would probably be the best gateway into the band if you didn't want to just jump headfirst in. However if you did want some idea as to where to begin, besides the two shortest tracks on the album, definitely begin with the first three tracks, the last two songs, including the epic title-track, Sic Transit Gloria Mundi, are dominated by long passages of drone, which is obviously not everyone's bag.
Overall, I have to say that I really enjoyed this album and it grows on me more with each listen. Like I said above, this is easily the darkest record of this year, and I don't think anything coming out in this month will be able to beat it. If you like engaging music with a very bleak atmosphere, definitely check this out.
Overall Score: 9.5
Highlights: Every Track Is A Highlight
Posted by maskofgojira at 8:00 AM