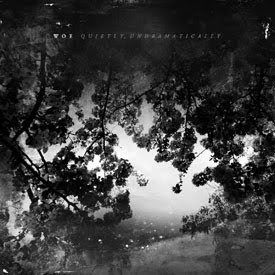 Unfortunately, The Title Is Not What Is On Here.

Woe is a progressive black metal group from Pennsylvania. This is also the first release to feature a full band, the first album was recorded entirely by band founder Chris Grigg. While this album does tread some familiar ground, it is most certainly pushing far beyond that sound as well.
For those that expect the same sort of full-throttle aggression that the debut album from Woe did might be a little disappointed by the increase in progression, melody, and variety on this album. As the debut album demonstrated an all-out assault of melodic black metal, this album goes into elements of progressive rock, crossover hardcore/thrash, and even a bit of death metal. In a world where black metal is constantly evolving into new shapes and forms, the traditional way is becoming a way of the past, unless it's done well, it's certainly hard to argue that this band hasn't changed for the better.
There's still your melodic black metal sound on here, but as mentioned, it's mixed with a lot more ideas and elements that push it past being just another melodic black metal band. The use of several the genres mentioned above does indeed add a unique flavor to this band, such as the clean, melodic vocals on the title-track, Quietly, Undramatically, or the climbs and falls in A Treatise On Control. Even the more aggressive tracks like The Road From Recovery or Without Logic that have a more traditional black metal/hardcore-thrash vibe to them have a more interesting sound than some of the more straightforward melodic black metal acts to come out. I think that everyone could agree however that the epic Full Circle is the track that sticks out as being the most progressive track on the album, going through almost Opeth-like soft parts with ease before switching back into black metal bliss.
But it goes without saying that the biggest improvement is made in the production, which is no longer just a punch in the face with the guitars ripping your face off. This album is certainly a bit more subdued, with things coming out a lot clearer than on the debut, from the drums to the guitars to even the bass. Personally, I would have liked the vocals to be a bit higher up in the mix, but musically, it sounds fantastic.
Overall, this is a solid record that I enjoyed quite a bit. This may not have been my favorite black metal record from this year, but it's one that I keep returning to for some reason or another. If you like progressive tinged melodic metal, check this out, you won't regret it.
Overall Score: 8
Highlights: The Road From Recovery, Quietly, Undramatically, Full Circle
Posted by maskofgojira at 10:03 AM