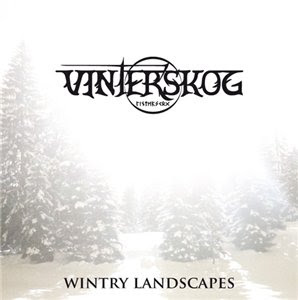 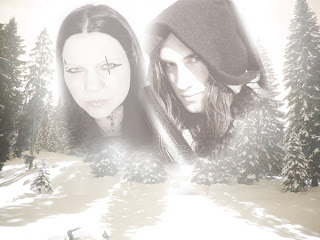 Not The New Vintersorg, Sorry.

Vinterskog is a pagan black metal duo from Switzerland. This is the duo's first full-length release ever. This duo caught my attention with their name, which I mistakenly took to be Vintersorg, but it was not.
This thing starts off like it's trying to be epic and huge, but opener Awakening doesn't ever reach that level. For some reason this track keeps feeling like it's building towards a climax using these epic strings and atmospheric synthes while the guitars and drums come in and just play this repetitive building riff that goes nowhere. Even the females vocals, yes, the vocals, synthes, and flutes are all played by a girl, don't really feel all that appropriate for this track.
But now that the awful opener is out of the way, we can get to the rest of the album. Evighetens Pilegrim starts wonderfully, with aggressive, yet melodic, tremolo picked guitars and harmonized male/female singing. Sure, that's nothing original, but it certainly is well performed on the duo's part, as solos, both guitar and flute, are used throughout the album, much to their benefit. For the most part, this album has more in common with black metal rather than folk music, but a track like White Plains (The Wizard) brings the folk side more to the front, and is actually quite refreshing, especially seeing as the influence is not overused.
Stylistically, the duo make use of a fairly decent amount of influences ranging from more symphonic and folk elements to the typical melodic black metal and even a bit of thrash. Thus, as one might expect, the music is melodic, not overly aggressive, but containing some good, catchy melodies, hear Poison. However, there in lies the biggest problem, besides the opening track, with this album and really all bands in this genre, they may come up with great melodies, but in the end, most songs end up being interchangeable with each other.
Overall, I do believe that this is a decent album that has a lot of good, catchy melodies. A few of the songs could be touched up a bit, maybe made a little bit more interesting, but this is really above average for a debut release from a group in this scene. If you like melodic black metal with a bit of a folk influence, don't be afraid to check this out.
Overall Score: 7
Highlights: Poison, Secretly Dead, Fire Banner
Posted by maskofgojira at 12:18 PM