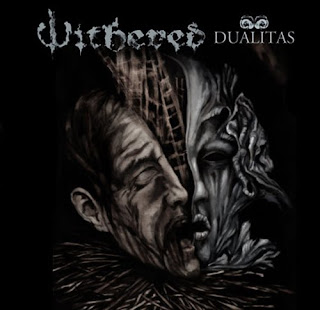 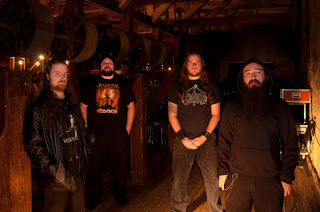 Withered is a blackened sludge metal group from Georgia. Having released two prior albums that have received critical acclaim from both in and outside of the metal underground. This, their third full-length sees the band moving into even more adventurous territory.
This is my first time listening to this group in a long time, first time I'm actually giving them a chance. I'll admit that I kind of wrote off 2008's "Folie Circulaire" as being another album from a genre that I didn't particularly like at the time. So this is the first time I could say that I'm actually listening to a Withered disc, and boy did I get the wrong impression from that previous album, because this is what I like to hear with black metal and sludge metal, crusty, disgustingly dirty, and filthy sounding songs.
Right from the opening of Extinguished With The Weary this band just lets loose all they have to offer, it's the perfect mix of black metal intensity and atmosphere with the dirge-like riffs of sludge. However, while that opener may epitomize what I see blackened sludge to be, the rest of the album proves to be much more diverse and open to newer influences. Sure, there are moments of blasting and grinding, which are shown in near perfect usage, but within the album there are also elements of more psychedelic rock, crust punk, and even a bit of doom metal. These tracks also move surprisingly fast for sludge metal songs, yes the black metal parts help that, but the length of some of these tracks are a bit long yet never feel as long as they actually are, hear a track like Aethereal Breath.
The production on here is exactly what I like about the sludge genre best, when it's not overly produced, but makes a band sound real and authentic. Interlude on the album is a track that pretty much is given to minimalism with very little actual playing occurring, but loads of feedback and atmosphere piling on top of each other. Actual songs on here however retain that same sort of vibe, with guitars just having a much more live quality to them that can't be faked, and for some reason this band manages to capture that quality while others I've heard this year just haven't.
Overall, I have to say that I really liked this album and I'm glad I gave it a chance. While some might consider the production to be a bit too raw, it's definitely perfect for the music. This is one of the best sludge, mixed with other things, albums to come out this year, definitely give this a listen.
Overall Score: 8
Highlights: Residue In The Void, From Shadows, Aethereal Breath
Posted by maskofgojira at 11:55 AM